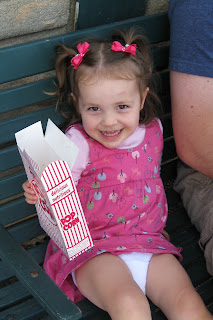 Dh is away on a business trip. The past few business trips have had him going to warmer climates (Hilton Head and Portugal) while I deal with major snowstorms. You remember the crazy one in late Feb this year? I was stuck shovelling the driveway for hours with kids crying the whole time. He is in Florida now so I figured I was in for an October storm. Luckily that hasn't happened.

I thought I would take the opportunity while he was away to tackle a few projects, one being potty training Bophie. Having struggled with so much infertility and miscarriages, I would love to have two in diapers, but I guess God knows I am not up for the challenge. With the adoption growing ever closer, I am trying to get Bophie trained before we leave. Two in diapers doesn't count if you just neglect to train someone perfectly capable of using the toilet :)
The girls have been working with her for a week or so. We got her pull-ups and she is excited to get candy for going in the potty. Sometimes she is so excited she goes 3 or 4 times in a row. I think she saves a little so she can go back. Today was a new milestone. She is going on her own. She put the step stool in the bathroom and manages all by herself. I thought this was ok till I found her this afternoon...
I really wanted to take a picture of this, but modesty prevents me from doing so. The little one put both feet in one leg hole and then hiked the thing up to her waist. She was like that for hours. I just don't think that could be comfortable. Thankfully I caught it before any major incidents, but she has done it twice since so I will have to be more on top of her trips to the bathroom.
I say don't tell dh because he would be mortified to know just how long dear Bophie walked around with her bare bottom before I realized she had the pull-up on wrong!
Posted by Nikki at 8:28 AM

DH here and yes, I am mortified. If she's anything like our new puppy she's probably left little 'gifts' around the whole house!