Bear, my budding third grader, is becoming a real wordsmith. 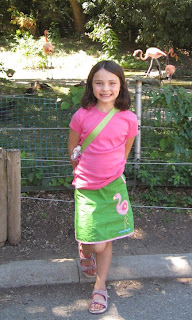 She also does a great flamingo imitation :)
While peach picking last weekend, we drove past a field of grazing sheep. Dh called out to all the kids crammed in the back of our van to take a look at them. As we approached the end of the field we also noticed an alpaca in the middle of a group of resting sheep. Banana calls back to him and asks what an alpaca is. Bear doesn't miss a beat and quickly retorts that an alpaca is a "PACK" of sleeping sheep. 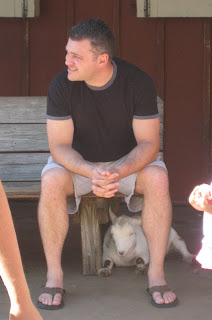 I know this is a goat (not an alpaca), but I'll use any excuse to post a cute picture of my handsome dh :)
In a completely unrelated conversation, we were discussing what an easy baby my little Gabe has been. Of course then all the children wanted to know where they ranked on my newborn difficulty scale. Gabe has hands down been my easiest, but he was preceded by my most difficult. Little Bophie caused me much angst as a newborn, especially with her bouts of colic. Later Bophie asked her much wiser older sister, Bear, what colic was. Bear, again not missing a beat, told her it was something you have when you are a baby and it turns your tongue yellow. Poor Bophie was incredulous at the idea her tongue was yellow. 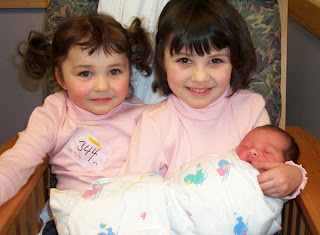 This has to be one of my all-time favorite pics. It is Banana and Bear with my colicky little Bophie.
Where does she come up with these things?
Posted by Nikki at 11:12 AM

Email ThisBlogThis!Share to TwitterShare to FacebookShare to Pinterest
Labels: Bear

HA! She's a hoot. What a fun family you have.