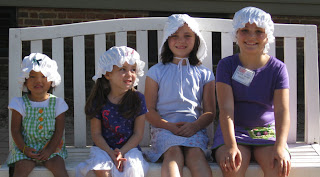 Vacation was almost a month ago for us, and yet it seems as though we are still recovering. 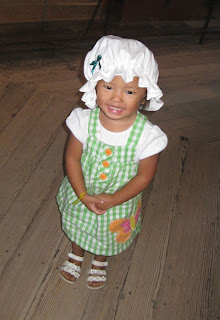 For the second leg of our vacation we headed to Williamsburg, VA. We were able to get an amazing deal (specifically for homeschoolers) on a resort condo near Colonial Williamsburg. It was beautiful, much better than a hotel room. The girls were able to sleep in their own "princess room" and we had a full kitchen in which to prepare meals. This being vacation, we opted to only prepare breakfast. There was also a beautiful outdoor pool area. Since it was unseasonably warm, we took advantage of the pool every day we were there. We would see the sites (which often left us dusty and hot), come back and go for a quick swim to cool everyone down, put the little kids in their jammies, and then head out for dinner. 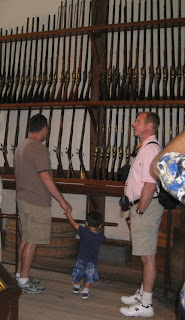 Our first few days were spent in Colonial Williamsburg, where the town is set up as if it were the brink of the Revolutionary War. We had prepared for this by skipping to this era in our History course, watching a few documentaries, and, since we have girls, watching (and reading) the American Girl Felicity movie. 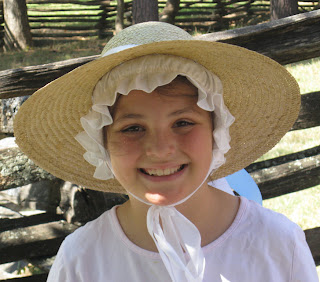 My girls had such a good time. We enjoyed touring the buildings, watching court proceedings and plays, and talking to the characters. The girls really immersed themselves in the whole "living history" thing. They bought their mob caps, and tried to put together their own colonial outfits. It was amazing how well Banana did this. She probably ruined a beautiful white skirt, but she tried very hard to fit the part of a colonial girl, and learned quite a bit in the process, so I think it was worth it. New colonial dresses are in the works for all the girls, although I wish I had thought of this before the trip. 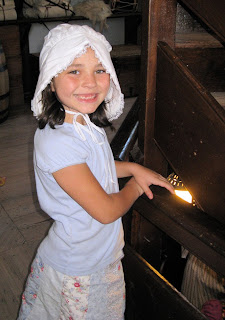 We also visited Yorktown and Jamestown. The Jamestown Museum was recently renovated and is one of the most beautiful museums we have visited. There was also a recreation of the Jamestown settlement that had replicas of buildings that were most likely part of the original settlement. There was also a recreated Powhatan village where we could contrast how the early settlers lived vs. the Native American Indians. There was also a riverfront area where we were able to tour replicas of the Godspeed, Susan Constant, and Discovery. It is amazing how these men and boys sailed across the ocean. 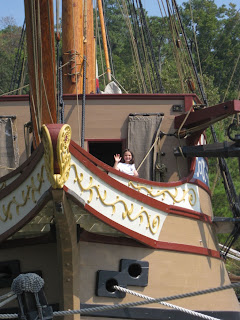 While the trip was obviously educational, we all really enjoyed ourselves. The girls enjoyed it so much, I am not sure they realize how much history they absorbed. Even dh and I learned a few things and had a few discussions about the founding of our country. Of course, these talks didn't last long as traveling with the little kids left us pretty much exhausted. We fell into bed at the end of most days. 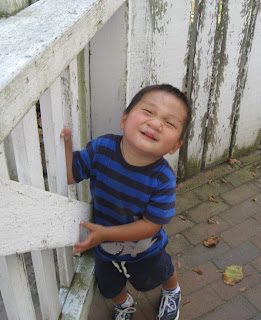 The other wonderful part of this vacation was that once again we were able to meet up with good friends. While the sites were educational and fun, and the lodgings were luxurious, the company really made the vacation for me. We were able, once again, to meet up with a family we met while traveling to adopt Juliana. The friendship began on that journey has been a real blessing for our family. 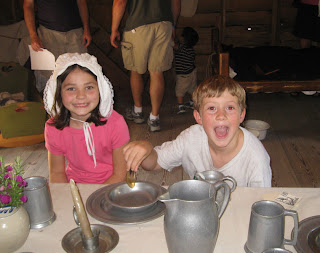 They invited us all for dinner on our arrival to VA. We had a great evening of good food and great company. The girls enjoyed the zip line in the backyard, Joseph enjoyed emptying their sandbox, and Juju enjoyed the attention. Later in the week, dh was able to try out the water balloon launcher and I have a feeling I know what one of Joseph's Christmas gifts will be :) Denise was also kind enough to go along with us to many of the local sites. It was such a blessing to have an extra set of hands. The girls enjoyed the company of B and K. 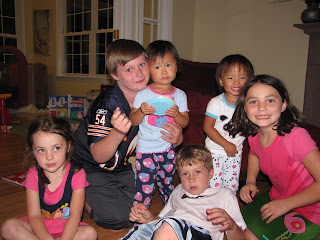 We weren't sure we were up to such a trip with our young brood of children, but we made it. It had been quite a while since we had a family vacation. It was nice to get away from the daily grind. The trip home (two got carsick) might be enough to persuade us to wait a little before attempting that much of a drive, but the memories made will most likely win out, and we will all look forward to our next family adventure. 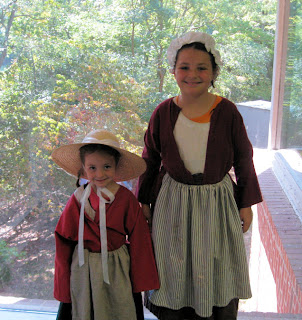 Email ThisBlogThis!Share to TwitterShare to FacebookShare to Pinterest
Labels: vacation