The Year of the Kindle

I know Christmas is long gone, but I was on a much needed computer break. So I am writing a post I thought I would write then, better late than never, right?

Dh and I really agonized over what to get for Christmas for our Banana this year. She's getting too old for most toys, and we aren't big on items most tween (I hate that term) girls would want. She couldn't even think of something she would like. Banana is our biggest book worm, and that's really saying something in a house full of bookworms. She has asked for new books every Christmas since she could read, so we were discussing different sets we could get her when the discussion turned to the Kindle. While it was out of our Christmas gift price range, we both knew she would love it. She loves nothing more than a new book to read and this would provide her with countless new reading. We justified the higher price by recognizing the educational potential. This year being what is has been, we have not made a single trip to the library, the Kindle lets us download new books from the comfort of our kitchen. So the added bonus of me having one less guilt trip about things I haven't been able to do lately made it worth the extra expense. 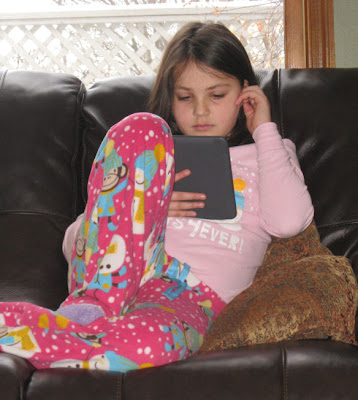 She l.o.v.e.s this thing. For almost a solid month she has had something new to read everyday. She has blown through reading material, but always there is something waiting. She hasn't had to reread the same novels over and over (you should see our Little House and Anne of Green Gables series, they are literally falling apart). There are so many classics available as well as older book series. She is currently finishing up the Bobbsey Twin series, looking forward the the Five Little Peppers series. Along the way reading novels like The Wizard of Oz, The Little Princess, and some short stories by Lucy Maud Montgomery. This is in one month and for free, except the cost of the device. 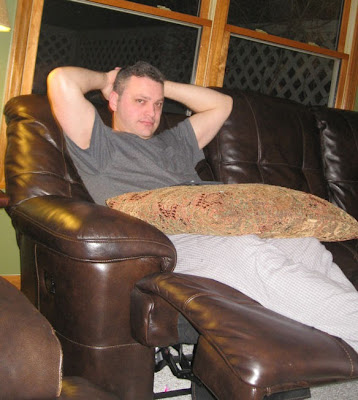 She isn't the only one, either. When dh started the research on the Kindle, he decided he'd like one too. So I bought him one for Christmas. He downloaded the Divine Office and the daily Mass readings and is taking the Kindle to Mass a little early to pray the Morning Office. He also is reading novels by an out of print Catholic novelist. At one point he had printed one of them off (100+ pages on our printer), now he has downloaded several, all for free. This is not to mention the few Zombie books he has thrown in as well.

Turns out Banana wasn't our only child enthralled with the Kindle, Bear was constantly borrowing her dad's Kindle. When it was in use, she would convince her gracious older sister to let her read over her shoulder as they turned on the "read to me" option. Listening and following along with stories together. Dh lost the use of his Kindle so much that he finally opted to use his Christmas gift cards to buy another for me (really so Bear doesn't borrow his). When it arrived he promptly removed all the girls' literature from his device and put it on mine. I didn't really think I would have time for it, but I have enjoyed the word games and picked out a few short stories. I like that it isn't back-lit. I am able to grab it when up in the middle of the night and it seems to help me get back to sleep. 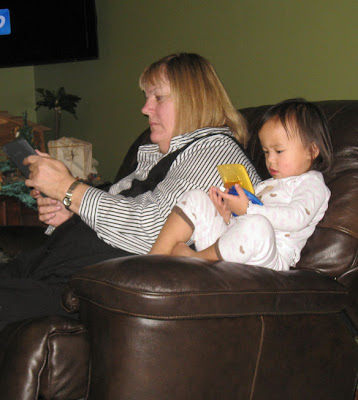 When it came time for us to purchase a gift for Grandma we again settled on a Kindle for her. She, too, seems to be enjoying it. I must get my love of word games from her. Juju, too, seems to be taking after her.
Posted by Nikki at 9:13 AM

I have the original kindle, and still love it! Although, I now mostly read on my iPad app for kindle, but it allows DH and I to share the kindle.