The Kind of Day I'm Having

Every now and then we have one of those days around here. I admit they have been less frequent than a year or two ago, but things have been on a crescendo and I knew the day was coming. Dh has had to get up for the early Mass the last two days. The boys simply do not sleep through Dad getting ready in the morning, no matter how quiet he tries to be. So the last two days they have woken up more than an hour earlier than normal. Then naps were thrown off yesterday because they were both so tired. Mom, too, is still suffering from early pregnancy fatigue and is bone tired. I need a nap.

Then this morning hit. When dh called at 7:15 I had already had it up to my ears. Gabriel was overtired and would cry, or scream, or whine every time Joseph came within three feet of him. Joseph can of course sense this and hones in on the scent. My nerves were shot. Then shortly after breakfast they were caught with markers, hiding behind the rocker writing on the walls. OY!

The last straw was when I was summoned to the bathroom to find this: 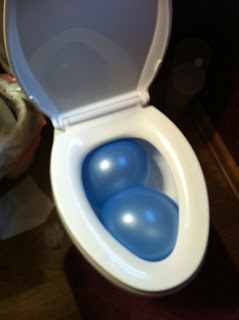 Boys, seriously only my boys, would think to do this...
Posted by Nikki at 3:29 PM

Email ThisBlogThis!Share to TwitterShare to FacebookShare to Pinterest
Labels: Gabriel, Joseph, someday I'll laugh at this

too funny. they are at a great age for mischief.