Finally, I'm getting around to posting this update about Peter's surgery which has been written a little here and there. Sorry for the long post, but this post is more for my own benefit, remembering this piece of our family history.

Peter's surgery took longer than expected, but the doctors felt it went well. His recovery on the other hand...not so well. When Joseph had this surgery I was totally unprepared how difficult it would be to see him in pain. When they wheeled him into his room in this large white cage, my heart broke. You could hear him crying all the way down the hall and he was writhing and thrashing in pain. I thought that since we knew what was coming with Peter it would be easier this time around. It wasn't. It was still so very difficult to watch our child in obvious pain. Still, I found comfort in the fact that he stopped crying when I held him. These first few months Peter has been home have been all about bonding and I was so glad that I could provide him some very small measure of comfort. 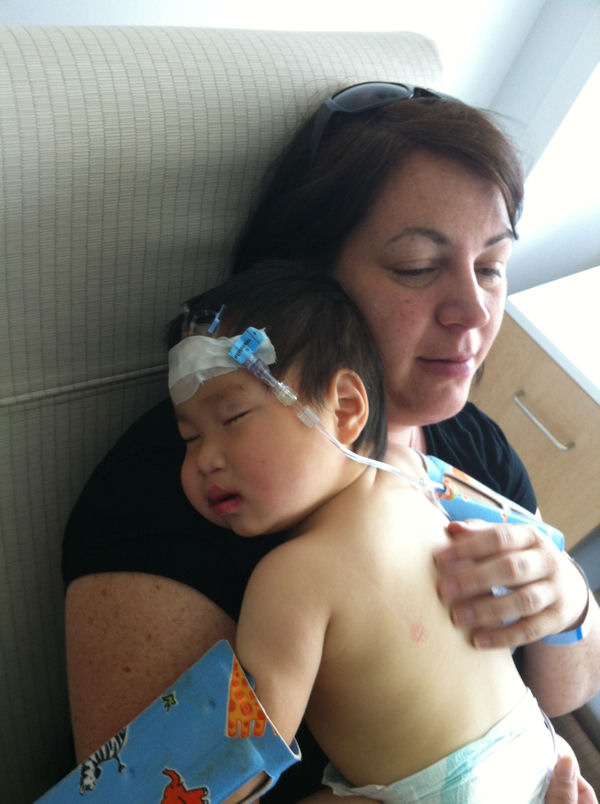 When Peter first came home we had quite a bit of difficulty feeding him and getting him to take even liquids. Thankfully, there was a doctor on the trip to China who assured David his thirst would eventually kick in when he wasn't as stressed when Peter consistently refused to drink anything. The trauma of this surgery left Peter again refusing to eat or drink (really who can blame the kid), and we had to stay at the hospital longer than expected. We tried so hard to get him to drink anything, but he just wasn't having it.

At home, we continued to have to practically force any food or drink on a little one who cried more than I thought possible with less sleep than I thought possible. We spent the first week post-op trying to comfort the very uncomfortable one, worried about him not eating or drinking, and all with minimal sleep. I felt like I was a couple cups of coffee short of normal-- only I couldn't have that coffee because of little baby girl in utero. 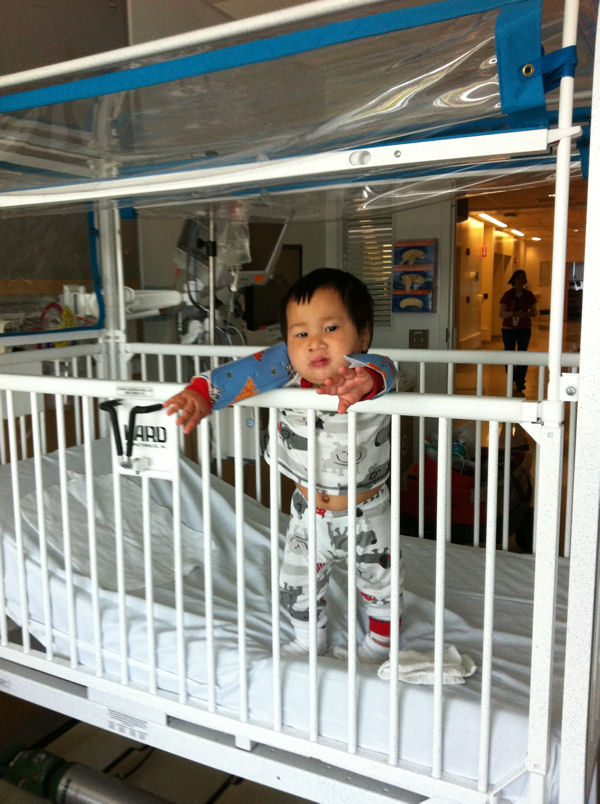 On Sunday morning, after a week of little sleep and nerves shot from the crying, I noticed that something in Peter's mouth didn't look right. It appeared that he had two tongues. Knowing he had been wearing his no-no's (arm restraints that keep his arms straight), I knew he couldn't have gotten anything into his mouth. When I looked closer, thank goodness for the flashlight app on my iphone, his palate had fallen and was resting on his tongue. I immediately ran him downstairs to show David who had tried to let me sleep in by taking the crack-of-dawn kids who didn't understand how sleep deprived their parents were. He quickly called the hospital.

By the grace of God, our surgeon was at the hospital. When he realized we were local, he met us in the hospital half an hour later. He had already scheduled the OR, and in no time at all we were back in the same waiting room until there was news about this new procedure to stitch his palate back to the roof of his mouth.
When we finally got to see him, we were again taken aback by how small and miserable he seemed. This time they had so much trouble inserting an IV that the only place that they could get it was his forehead. He had many bruises to point to how many times they had tried other locations. 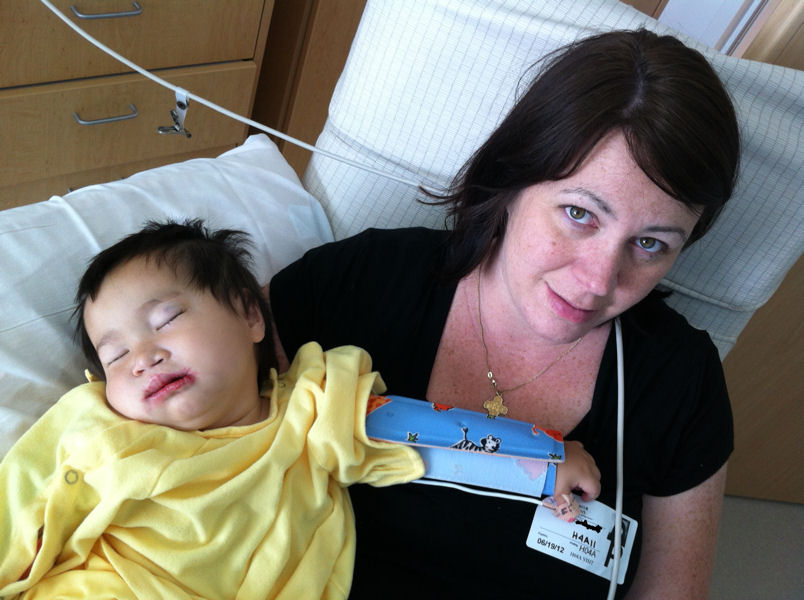 We were able to go home that afternoon. Peter did a better job with drinking and as long as I was holding him, he seemed in better spirits. He had a comfortable little spot on top of my watermelon stomach. The trouble was that he would just get settled and almost asleep when Baby Girl would start to kick and jab letting him know he was invading her space. This would frustrate him and there were inevitably more tears. Sibling rivalry sure starts early. At night, Peter was frustrated at his arm restraints. They have a long piece of velcro that sometimes had him stuck to his sheets. He also likes to curl up and that just isn't possible with those things. It was a miserable three weeks for him.

It took two more weeks of fussiness and a very serious little boy before we finally started to see glimpses of the sweet boy we were beginning to see before the surgery. His laughter was a balm to this weary, hormonal mother who wanted so much to bear all of her little boy's pain. The more he laughed and played, the better we all felt. Now weeks out of the surgery he is such a sweet, funny little boy who laughs, plays, eats like a horse, and enjoys trying to keep up with his brothers. Thank goodness that ordeal is over...
Posted by Nikki at 10:12 AM

Email ThisBlogThis!Share to TwitterShare to FacebookShare to Pinterest
Labels: Peter