When Banana was born, I read all the books, all the books. I knew from that reading that when she was born, we would have nothing to do with binkies, pacifiers, or nuks. Whatever you called them, I didn't need them. While I gave these instructions explicitly to the hospital, on Banana's first return from the hospital nursery, she was contentedly sucking on a new bright green binky peaceful as can be. From that early moment, the binky became a part of her baby days, and her toddler days. Thankfully, breastfeeding went so well, the binky was no trouble. 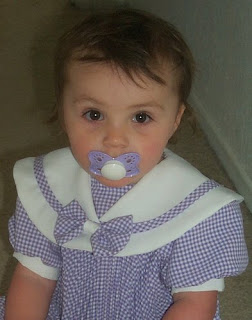 You sure can tell she was a first child with a binky to match the dress :)
There was another problem though. We could never find a binky when we most needed them. After countless episodes of MIA binkies at the most inopportune moments (baby screaming, food in the oven burning, on an important phone call, you get the picture), I invested a small fortune in binkies. We had them everywhere, except when we needed them most, like the middle of the night. Dh thought this was all too much hassle, not to mention expensive, so when Bear was born he said NO BINKY!! I went along at the beginning. I remembered those sleepless nights searching for a binky. 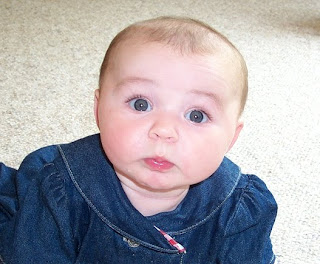 Look at those pursed lips--no binky for her
After a few weeks, however, I missed the binky. I missed it terribly. Bear had no other pacifier but me and I was exhausted. I had a cough I couldn't kick, we had just moved across the country into a new house, and I needed her to take a binky. So I bought every kind you can imagine. Who knew there could be so many varieties? I tried them one after the other, but she would have nothing to do with any of them. Oh how I longed for that binky in many rough moments. 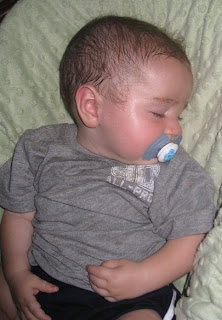 Gabe, my dear boy, loves his binky. Maybe not as much as Banana, but enough to give me a few moments of peace in a pinch. For many months we had the same binky, and one on reserve. I thought that perhaps the key to not losing binkies was to only have one and keep track of it. That tactic seemed to work. Until a new war was waged.... 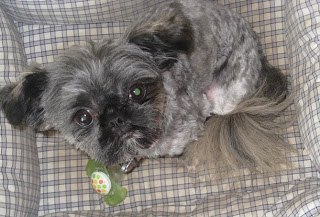 Me against the dog. Bella decided the binky makes a great chew toy. She chews every last one she can wrap in her paws. She pulls them out of the swing, off the bouncy seat, and I speculate she has jumped on the couch to get them. I have bought at least six new packages and today, after this, 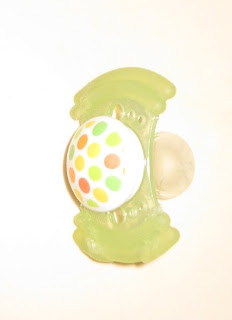 I am once again down to my very last binky!
Posted by Nikki at 2:58 PM

Email ThisBlogThis!Share to TwitterShare to FacebookShare to Pinterest
Labels: life

love this post. i have had binky battles per se with each of my kids too. Like you I swore off binkies with earlier babies but now with baby 6...i am secretly delighted that she takes a binky...or her nuk was we call them.

i hope the dog tires of them!

Love this post. Good Luck on the binkie war. When the twins were born and would only take the funky kind they handed out at the hospital I broke down and ordered a large container of them.