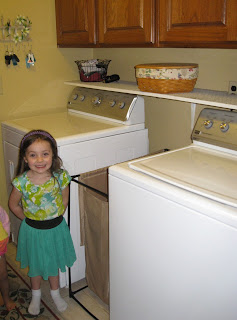 A few months ago I thought the day I had been anticipating had come. I, however, was thwarted by dh who had been praying the day would be long delayed. We found that we were rather divided in our prayers about our major household appliances. I was thankful at the time that dh was able to fix our ancient, ailing machine; but I also ended my post with a wish that his fix would only last until March. Turns out that was prophetic, or maybe just a self-fulfilling prophecy (could it have been I was trying to wash too many winter comforters?).

This week the machine went kaput-- for good. Today, these new beauties arrived and were installed. They are now getting quite a workout as I attempt to catch up on laundry.

**P.S. Don't I have the cutest washing machine model?
Posted by Nikki at 3:11 PM

Oh... I thought that little cutie *was* the new washing machine. :)

Hi!
This isn't a comment about your post per se, so you don't need to publish it. I just wanted to invite you to "Kids say the darndest things Friday" blog hop at:

We’d love to have you join the fun and share your stories. I’m sure that you have some real gems!

Congrats on the new pair of beauties!!! And that little washing machine model is the cutest!!! She's getting so, so big!