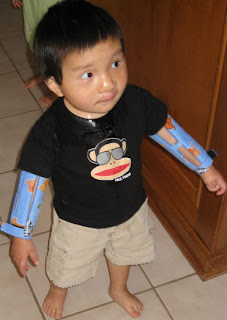 Joseph's surgery took a little longer than we expected, but the doctors consider it a success. Although it took some extra time, the doctors were able to close both openings in his palette and put in the ear tubes.

Joseph returned from surgery in quite a bit of pain. It was very difficult to see our typically easy-going little guy crying and moaning from the pain. The poor little fellow has had to deal with so much in his short life. Both dh and I wished there was more we could do to ease his pain and uncomfortableness. He had to endure this alone in China when his lip was repaired. I'm glad we could be there for this surgery.

He, Gabe, and I had a long night in the hospital. It seemed each time I rocked Joseph to sleep, someone came in to check vitals, give more medicine, or check his ears and mouth. Joseph would fuss at being poked and prodded, Gabe would then wake up, and I would do my best to get both boys back to sleep. Needless to say, I didn't get much sleep.

Sometime in the morning, I noticed a change in little Joseph. As I was giving him some juice, he raised his eyebrows and smiled. I knew he was feeling a bit better. By mid-morning Joseph was walking the hospital corridors and waving to all he met. We were able to come home around noon and Joseph was greeted by his doting sisters. Juju was especially happy to see him and came running in from the backyard saying "Hi Joe-Joe!"

Here he is in his 'no-nos'. These are to prevent him from sticking anything (like fingers, toys, bugs, etc.) into his mouth. He'll be in these for 3 - 4 weeks as he heals from surgery.
Posted by Nikki at 9:04 AM

I'm so glad to see this post and hear how you're all doing. Please let me know if you need anything at all.

We have had some computer issues and I have just been lazy so I didn't realize Joseph has surgery. I'm glad all went well. We have done the surgery round more times that I'd like to think. Recently Audrey had to have her appendix out. I have always been the wimp. I would be at the hospital until late then go home and Tom would spend the night with the child. In Ft Worth Joseph had to be in 2 nights so Tom took first night and I the second. But when my 10 year old daughter had surgery all she wanted was Mommy. She is 10 not 2. And I didn't have a baby nursing and still took me a couple of days to recover. Blessings to you all. Praying he will be out of arm no-nos soon.