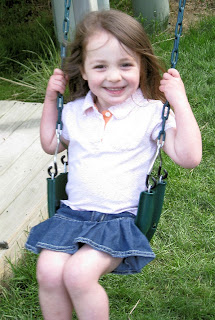 How do you like to go up in a swing?
Up in the air so blue?
Oh, I do think it the pleasantest thing
Ever a child can do! 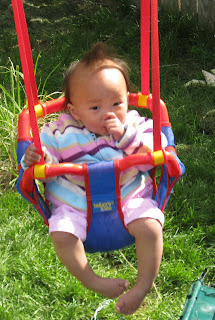 We spent last weekend going from one First Communion party to the next. We are so blessed to have such a wonderful parish community! I enjoyed the food, the company, and just being out on what turned out to be a beautiful weekend. The girls enjoyed playing with their friends-- and the swing sets. It seemed each house had new playground equipment to entice my children. Little Bophie especially enjoyed them, but took a spill off of each one, and two off of the last.

As we were driving home from the last party, the older girls in the back seat piped up asking dh when we would get our own swing set. Dh and I have talked many times about purchasing a set, but it always seems to get pushed to the back burner. We had been waiting until Juliana's adoption was complete and now we are waiting for Joseph's adoption.

I know it probably wasn't the best response (don't tell the parent police), but dh replied by asking them if they would like the swing set or a baby brother? The older girls didn't hesitate. They said if they HAD to chose, of course they wanted the brother.

Bophie on the other hand says, "I'll take a swing park."

When she got no response from us, after all, how do you respond to that? She very loudly stated, "Dad, I would prefer a swing park!"

Poor dh had to let her know she really didn't have a choice in the matter. She took it well and must have resolved to pray for a swing park because two days later our neighbor stopped over. She said her daughter was getting too old for their swing set and they wanted to get rid of it. She asked if we were interested. 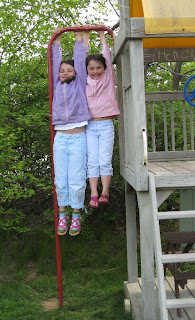 On Saturday, we enlisted some help and brought over the swing set. My girls are loving it. They are finishing school faster so they can go out and play.

Bophie now gets both a swing park and a baby brother! The rest of us get a reminder of how many little blessings we are given. 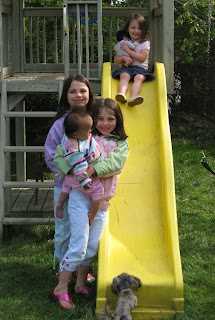 God is so good! Enjoy the swings! We finally finished ours!

Okay, I am holding back the tears -- that's the most precious post EVER!!!

Oh My goodness! That is precious. Proof our God is always with us watching out for us. Great incentive to complete school work, especially with Spring Fever setting in.
Congrats on the Swing Park!