One thing all of our adopted children have had in common is their insatiable appetite the first few months they are home. Eventually it wears off, but for quite some time they eat more than I think possible for their tiny bodies. Peter has been no exception, although he has been a little more particular than the others. He very much likes his snacks and sweets and will hold out for them. Sometimes crying at a plate of meat and veggies. Those snacks just draw him. 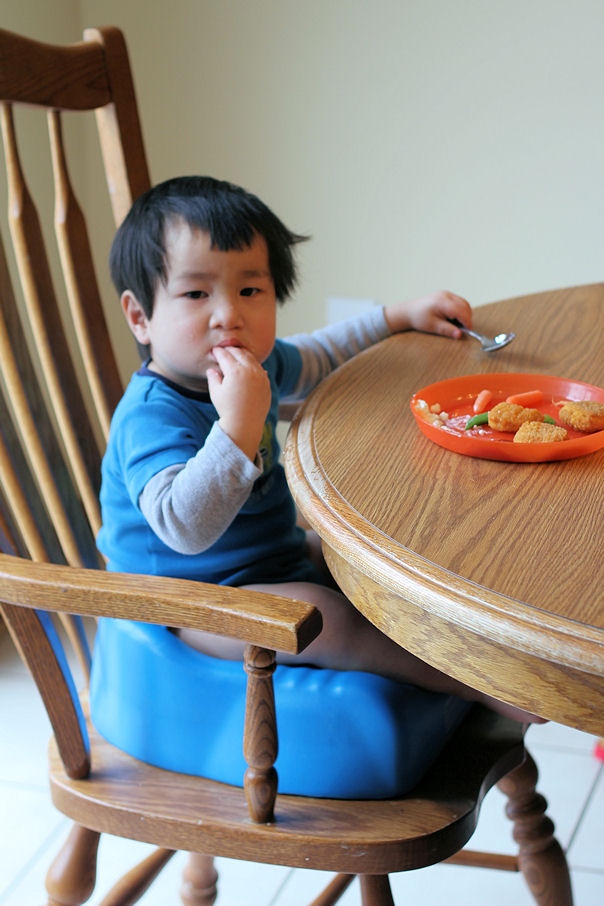 For the most part, I can tell when kids get into the food. They leave a trail of wrappers, crumbs, and debris after them. I recently discovered that Peter was smarter than I thought though. He had figured out how to get snacks on his own. 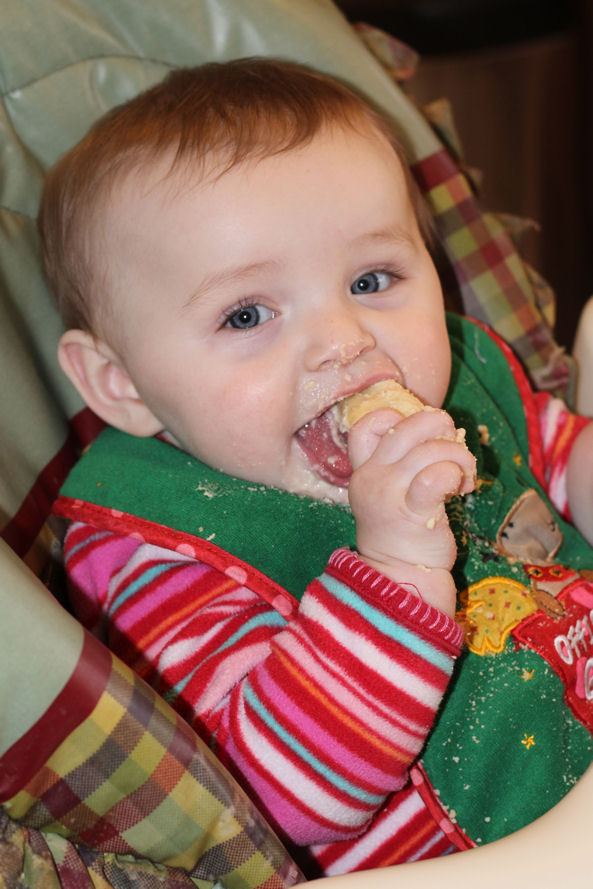 Ellie Belly is also learning to love cookies. She gets her own teething biscuits (homemade biscotti) and leaves her own mess.

At just a few days older than two, he has learned to step on his tip toes to reach the pantry handle to open the door. He reaches inside and pulls out the large container of animal crackers, one of his favorites. He then unscrews the top, reaches inside and grabs a few cookies. He stuffs them in his mouth and then carefully puts the lid back on the container and scoots it back to its place in the pantry. He closes the pantry door and walks away. 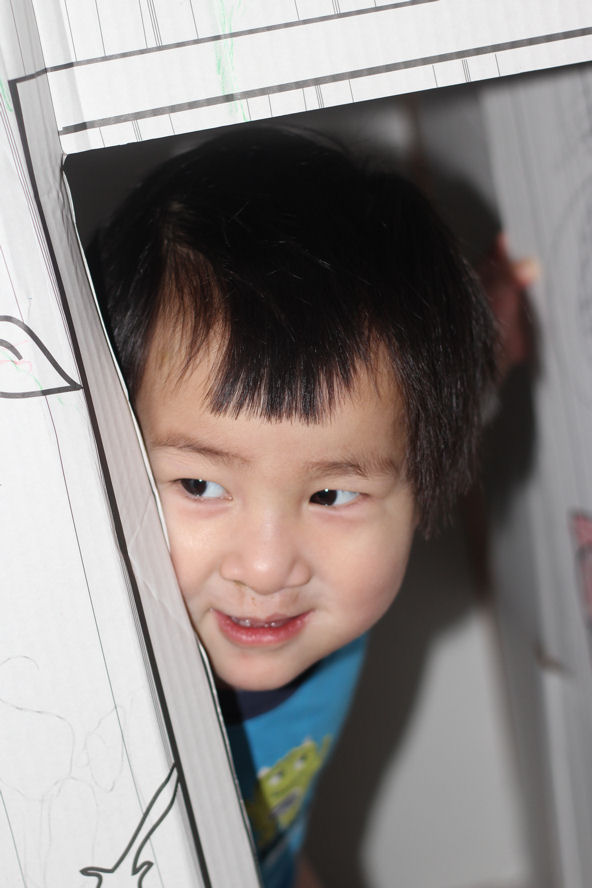 Can't you just see the mischief in his smile?

One evening I saw him doing this after not eating any of his healthy dinner and called dh to take a look. He watched in disbelief as he put away the container and shut the door. Then in true dh fashion he snuck up on him, gave him a stern "NO!" and made little Peter spit out his mouthful of cookies into the trashcan. Poor Peter stuck out his bottom lip for a few moments then spit them out and began crying. Everyone else felt sorry for a boy who really showed some initiative, but dh was right it couldn't become a habit.

For a few days I didn't notice anymore cookie raids, but then yesterday I glanced up from the computer to see him shoveling a handful of cookies in his mouth. As soon as he heard my best imitation of dh's "No," he looked up in horror. He took one look at my face, I was trying hard not to laugh, and promptly spit out every bit of cookie-- right back into the open (and almost full) container of cookies. He screwed on the lid as fast as he could, and went running out of the kitchen.
Posted by Nikki at 8:11 PM 2 comments:

It's All Fun and Games

Last night I had a rousing game of "I'm Going to Hang You By Your Toes" going with the boys. I chase them around the house and when I catch up to them, I grab their feet and hang them upside down and swing them. How it is that I can do this for what seems like an eternity and still tip the scales is beyond me. 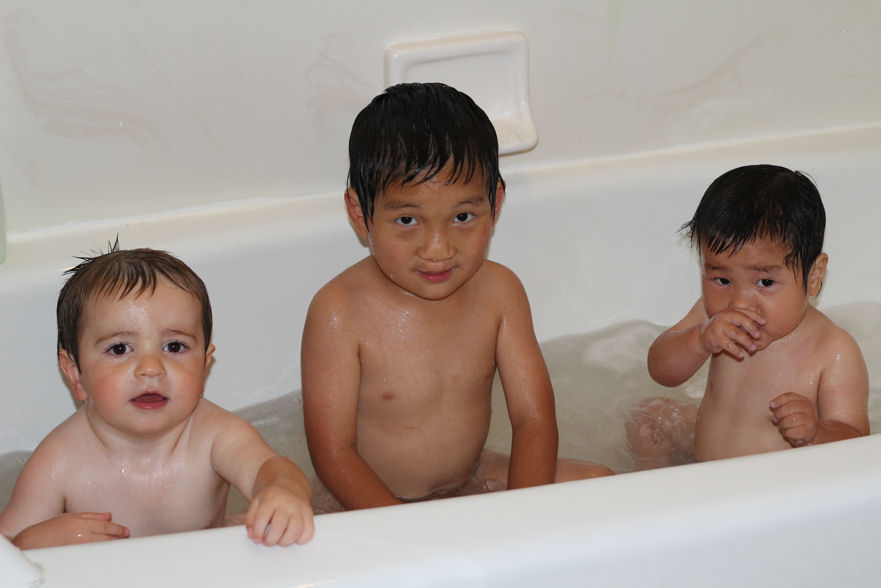 I started by chasing Peter, he's the lightest and most agile so I'm fooled into thinking this is a good idea. He was laughing and having a good 'ol time. Hearing him laugh is always a reminder of why we adopt. There is such joy in the belly laugh of a two year old. It was great. Then he ran into the wall. This was pretty comedic for me, but the goose egg proved it was more painful for him. 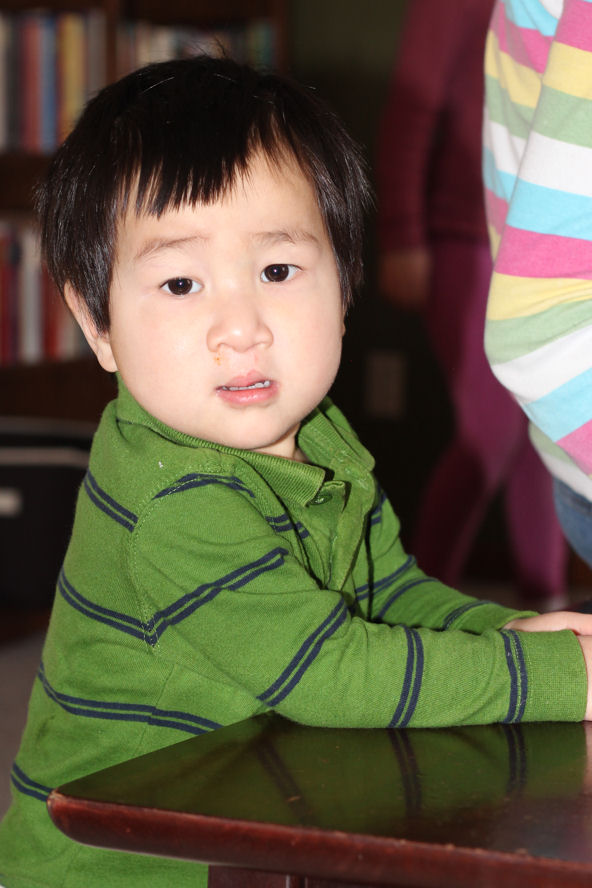 Then it was Joseph's turn, he's the heaviest and least agile so I quickly become aware I may have bitten off more than I can chew. I chase him around, only he's almost five now and harder to catch, he's smart enough to make me circle the coffee table. He, too, was laughing hard. Little boys laughing... Then he slipped on the kitchen floor. A second goose egg almost took the fun out of the game completely. 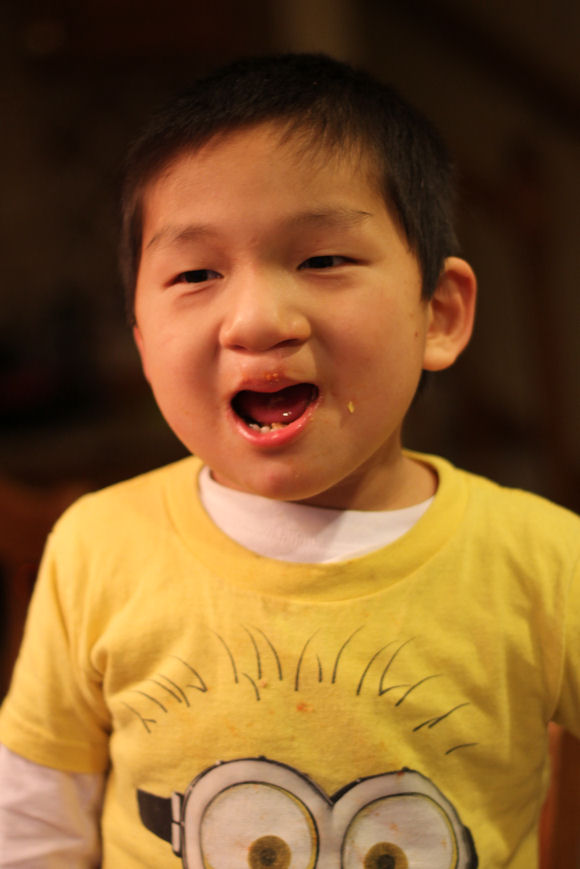 Gabriel just wouldn't be left out though. He needed his turn to be flung upside down. I needed a moment to rest. I decided to try to stall him. I told him I'd hang him by his toes when he told me how many toes he had.

He looks down at them and starts with the right foot. "One, two, three, four, five, six, seven," he looks up and grins then bends down to the left foot, "eight, nine, ten, eleven." He looks up at me with a mischievous grin and I ask again how many toes he has. "THAT many" he responds. I smile a little and ask how many THAT is?

He looks down slowly and says, "all those toes?"

I hung him by those four toes. I tickled each one of them, counting them so he'd know next time how many toes he has.
Posted by Nikki at 12:32 PM No comments:

My Sweet Sophia is Seven

Continuing on with the where did the time go theme, how can she already be 7? 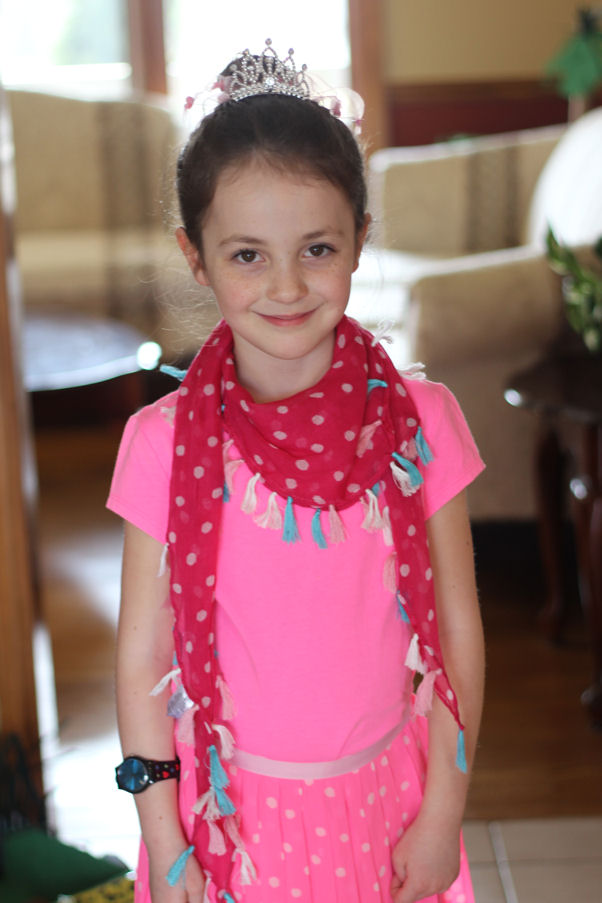 My very girly girl, my little mother hen, the shyest, the one that sometimes gets lost in the shuffle. This adorable little girl who never wanted to leave my side as a baby is now seven. As a baby none were more attached than little Bophie. She wanted nothing to do with anyone else, even Dad. She was never more than a few steps away. 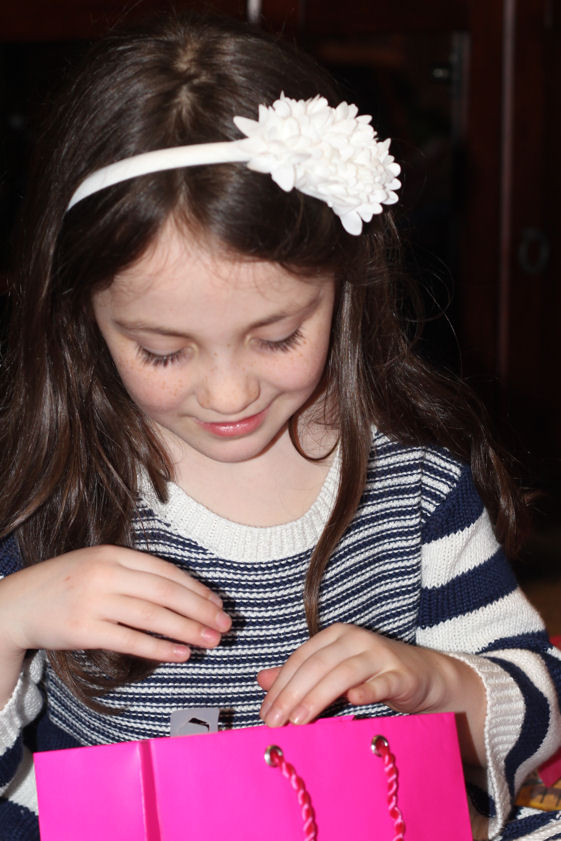 While still Mommy's girl, she was the first to tell me she wanted to go to school. Though she is still happy to be home and with Mom, she's the one most excited to head back out to school on Monday morning. She's the only school-aged child in this house not counting the days to summer break. 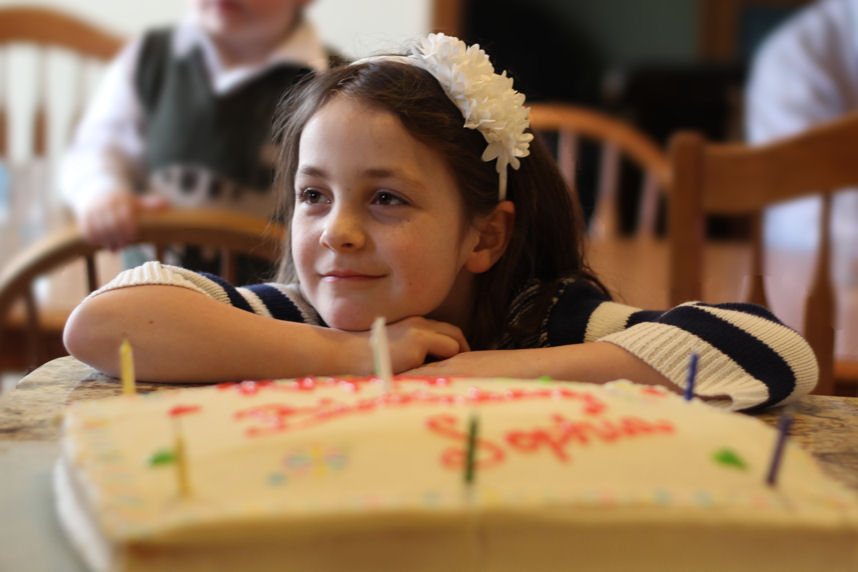 She was the last to recover from our weeks of the flu which gave meant she had to stay home with Mom while Dad took the others to the Air Force Museum. Even though she was running a good fever, we had a nice time going out to breakfast. I realized that while she is quiet, she'll talk your ear off if given a chance. She had so many stories to tell. 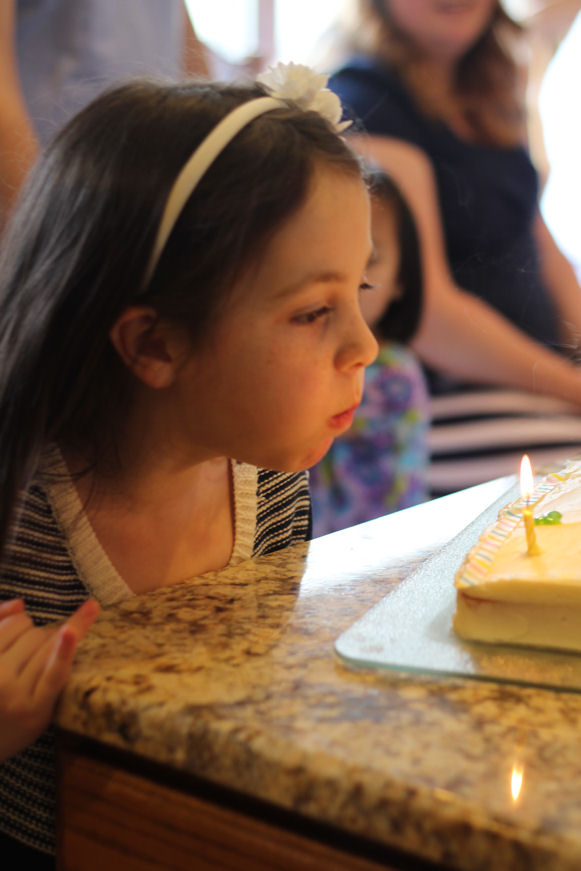 This year Bophie has really blossomed. She caught on to the reading thing and has become an avid reader like her sisters. She also has begun to learn the beauty of offering up little things for others. She will often give her sweet treats to a younger sibling and choose something lesser for herself. She also has a mother's heart and is the first to tend to a fussing baby. I love having her around because she so enjoys spending time with the little ones. 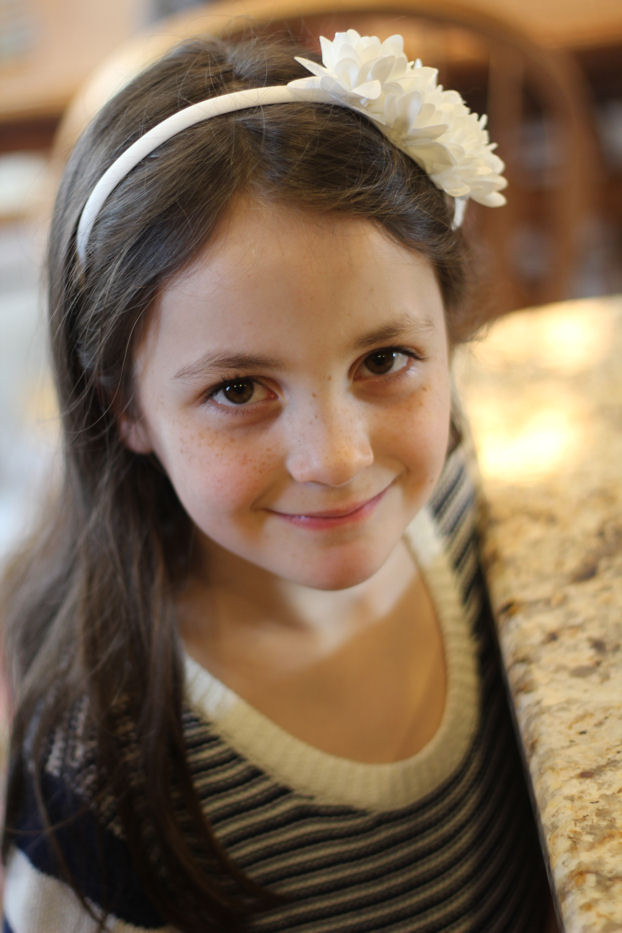 If I Ran the Zoo

Oh wait, I do run this zoo... right? At least I feel like a zookeeper most days. 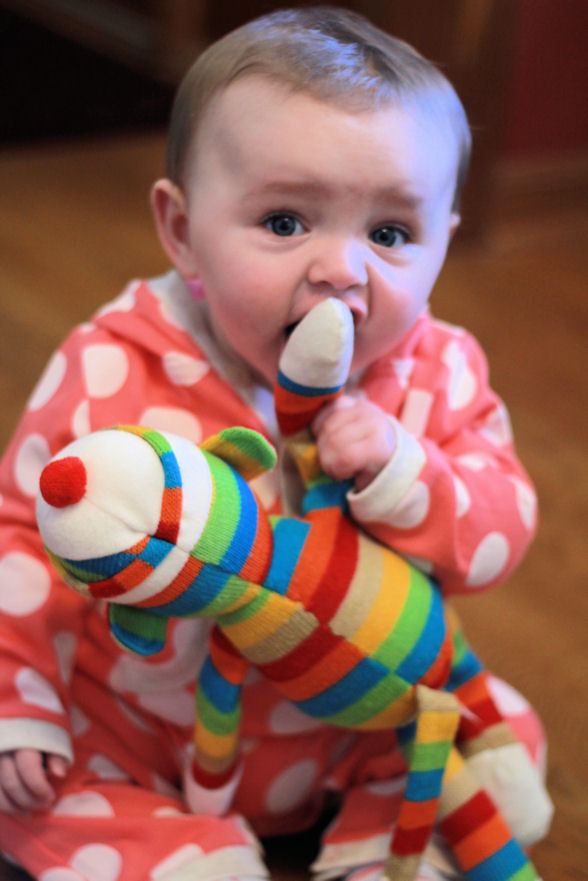 After three weeks of sickness, all the fever and throw up and headaches had left and on Tuesday not one child stayed home sick. They all went back to school. Then Wednesday we had a snow day and they were all home again. It was a blessing that we finally had a day off where everyone felt well, but my house seemed more zoo like than ever. 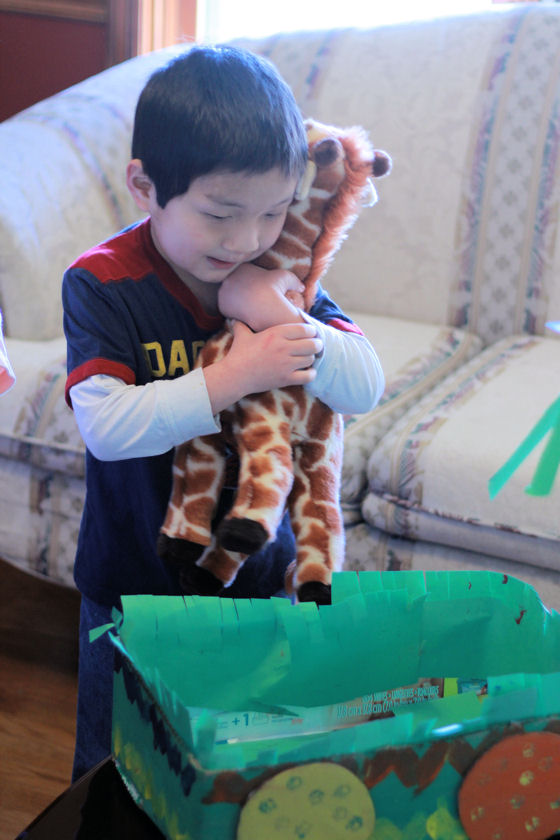 One of the things I love about Joseph and Juliana going to preschool is that they get a chance to do the type of projects I used to do with the older girls, but just don't seem to get around to doing anymore. What I dislike about preschool is that there are deadlines to projects. They missed school all last week so Monday I get a note about this Friday's zoo day and animal sleepover. The preschoolers are supposed to bring a stuffed animal to sleep over at school (easy enough). Then comes a mom's nightmare. The animals are going to have to have a place to sleep, so each student needs to make a habitat for their animal. The instructions for these projects crack me up, it's obvious this sweet teacher has never had kids and therefore never had to put together one of these projects during a week full of craziness. 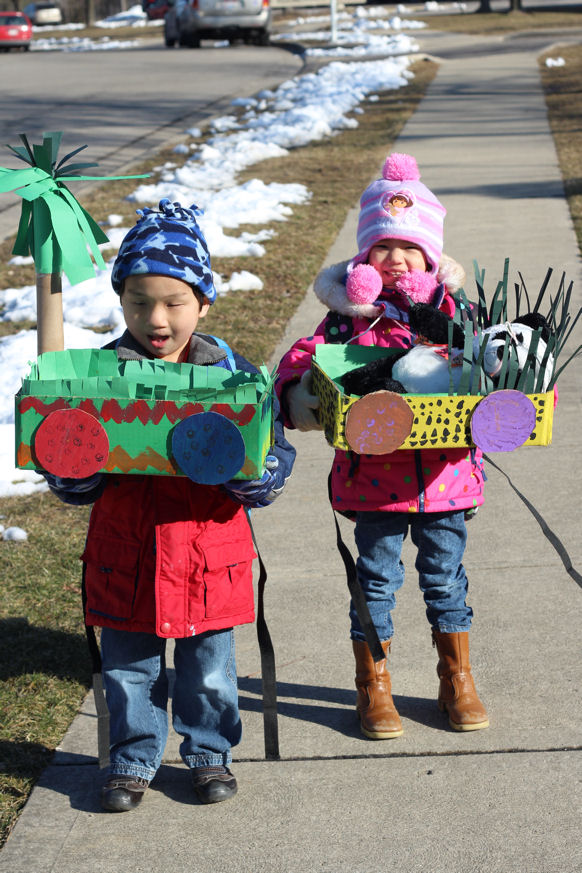 "Nothing fancy," the directions read, "it should be something the preschoolers put together on their own." Seriously, who gives four year olds free reign to paint, scissors, glue? We won't discuss the box cutter incident here. And while I have some of the smartest and most creative preschoolers (I'm not biased either), they certainly needed some help understanding habitats. Should you have an exceptional child that is able to manipulate all the necessary craft items and artistic enough to come up with their own ideas for a habitat box, do they really think these children are going to clean up the mess? These projects always always always fall to Mom. In my case, it took three older sisters, Mom, and a snow day to get it done. 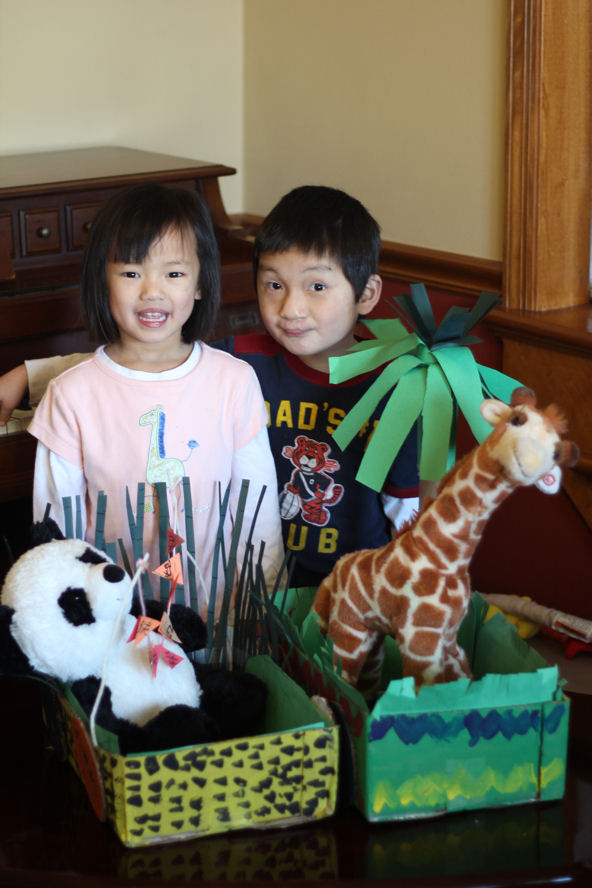 Still we got them finished. I thought they turned out well. I can also tell you that the other habitats I saw were most definitely *NOT* put together by preschoolers, smart and talented as they are. Now I have to get back to restoring the three closets I destroyed this morning looking for shirts with zoo animals on them. 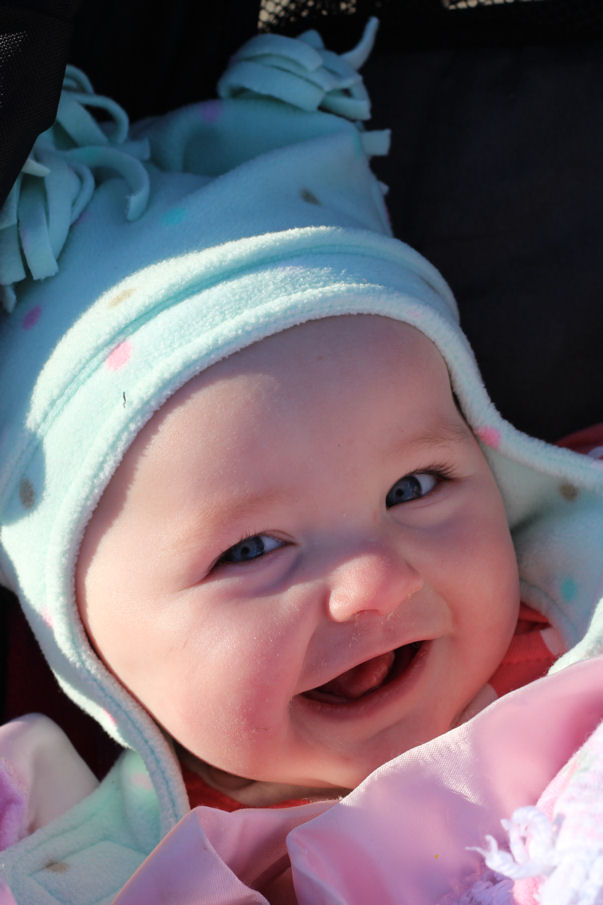 For these short weeks between Juliana and Sophia's birthdays we have our own little countdown of ages. Last year was more catchy with 5, 4, 3, 2, 1... Still it's amusing to answer when I'm asked the ages of my kids during this time. I have been reminded that while I have thought this period with five children under the age of 5 has been trying, the real fun might be when they are 16, 15, 14, 13, and 12. I try not to go there... 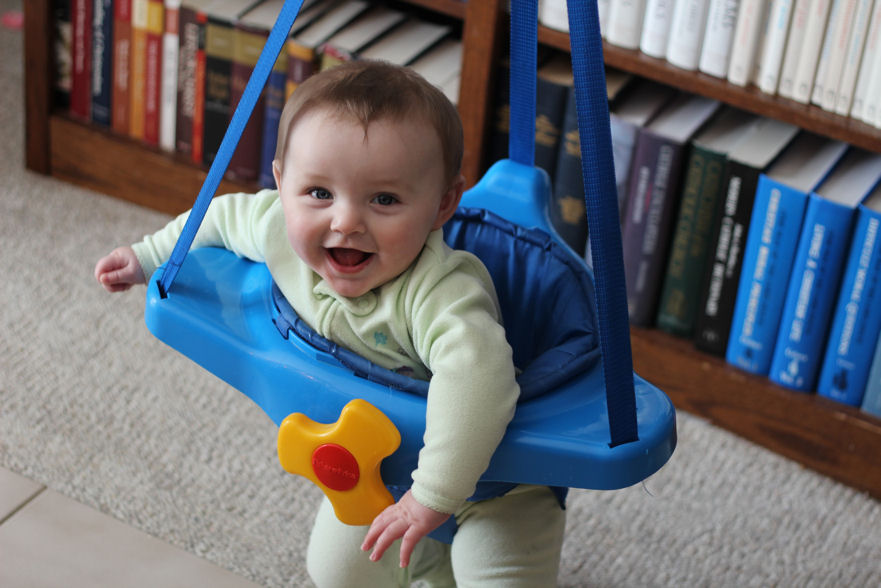 Speaking of birthdays, while my poor blog has been so neglected, one of the most important reasons I started blogging was to remind myself of all that I enjoy about my beautiful children. It's posted on the side bar that "the days are long, but the years are short." The days seem to be really long lately, but I don't want to let those years slip away. 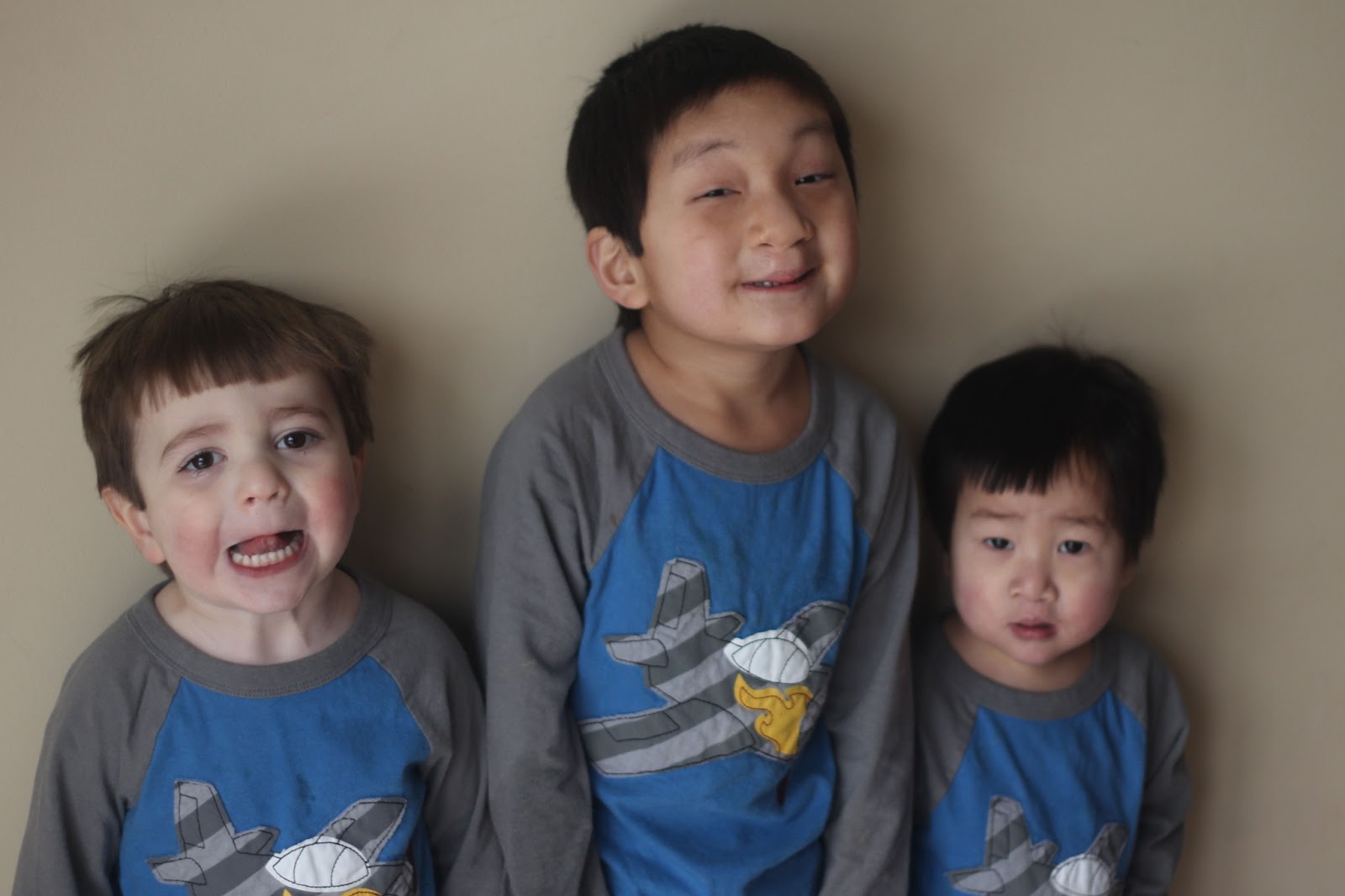 My favorite posts on this blog are the ones easy to write: the funny things my kids do, the moments when they make me proud, and the moments where if I don't laugh, I'll cry. My birthday posts have been harder to write. They prove that I'm not really a good writer, I just sometimes have good material (Joseph alone provides that).  Words often fail as I try to capture each child as they are at each age, that's why I'm so thankful for digital photography for pictures to capture what my few paragraphs lack.

To that end, I've gone back and tried to catch up on my missing birthday posts. Here are links to postdated posts:

Double Digits for my Catie Bear

A First Second Birthday for Peter

Gabriel is Three Going on Thirty

How Can Juju Be Five?
Posted by Nikki at 4:57 PM No comments: