Our third day in Guangzhou was a fairly free day for us. Some in our group headed to the pearl market. Six floors of pearls. 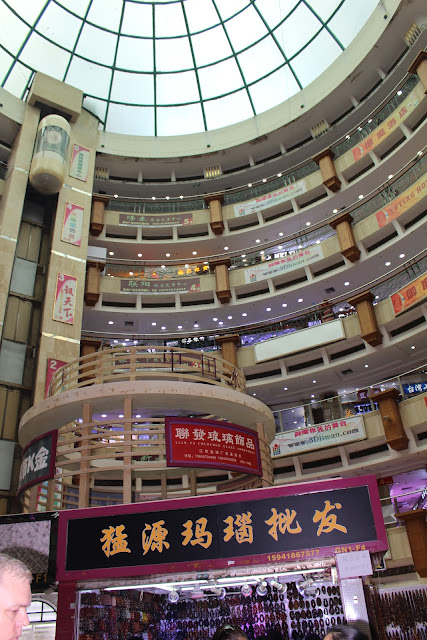 Margaret means pearl and we had hoped to find a few gifts. Jewelry just isn't really our thing. While Margaret certainly is our pearl, we aren't very jewelry savvy and I really dislike the bartering required in Chinese transactions. Most of our group had to return to the hotel to await TB results. Because Mazie is so youmg, we had more free time. We decided on a trip back to Shamian Island where we had stayed on Juliana's adoption trip. There was a trade show in town and we had trouble all week with taxis. David eventually talked me into this. 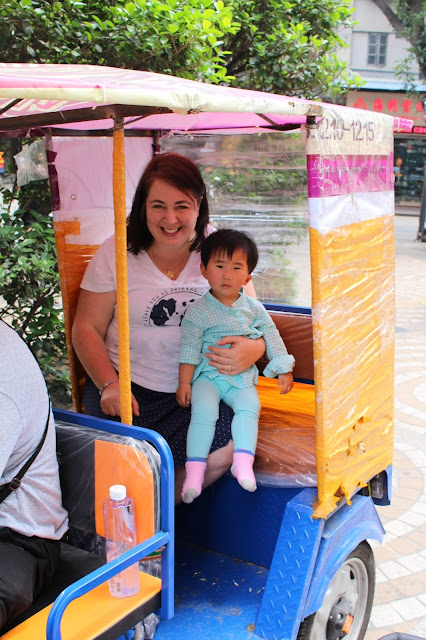 I hope he will eventually add his go-pro video of the experience. This man on a moped thought nothing of trying to outrun buses and much bigger and faster cars. I held onto that baby as tightly as I could as there were many bumps and turns. Still we made it in one piece for about $1 less than if we'd been able to find a taxi. 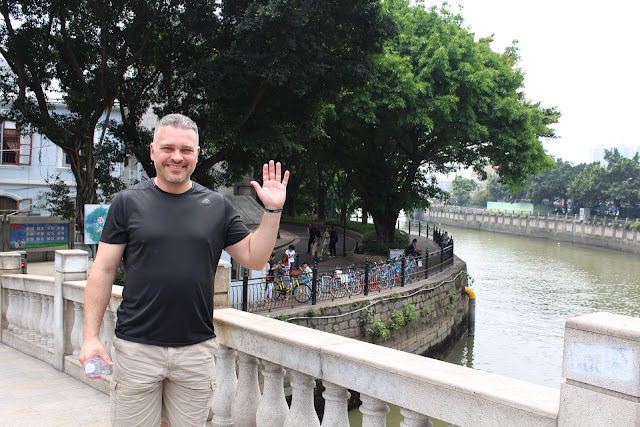 The island has a long history of catering to the adoption community. There used to be shops catering to adopting families on every corner. There were only a few left, but the island has few cars and was a quiet respite from the hustle and bustle of Guangzhou. 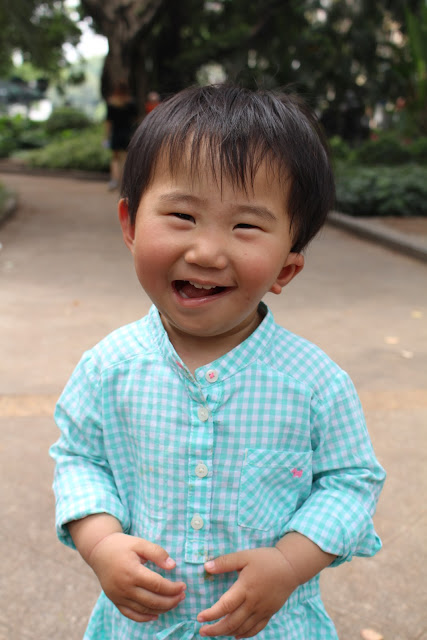 This quiet suited sweet Mazie. She enjoyed walking through the park where there was a little girl blowing bubbles. 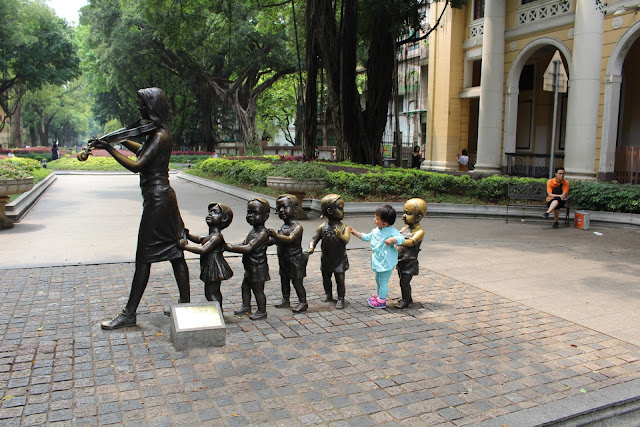 A picture with this statue has practically become obligatory in the Chinese adoption community. Mazie did us the favor of being especially cute while we snapped many pictures. 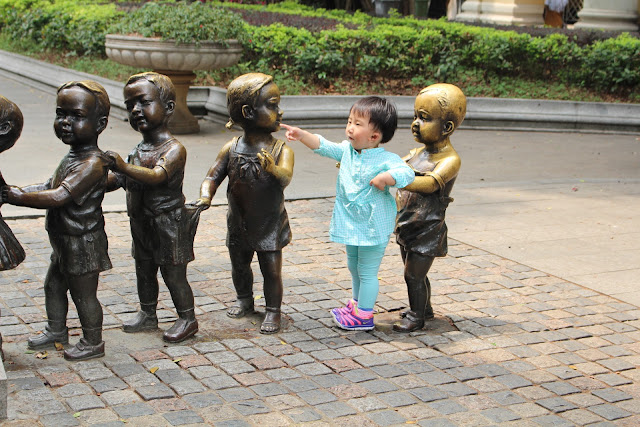 Her favorite part of the island was our stop for squeaky shoes. Forget the toys, and dolls, and hair bows. She saw these shoes and from her seat in the stroller, pulled them off the shelf, put them in my hands, and said, "xiexie (thank you), Mama!" At that point I think I would have bought her 8 pairs for a smile. She didn't even realize they squeaked. 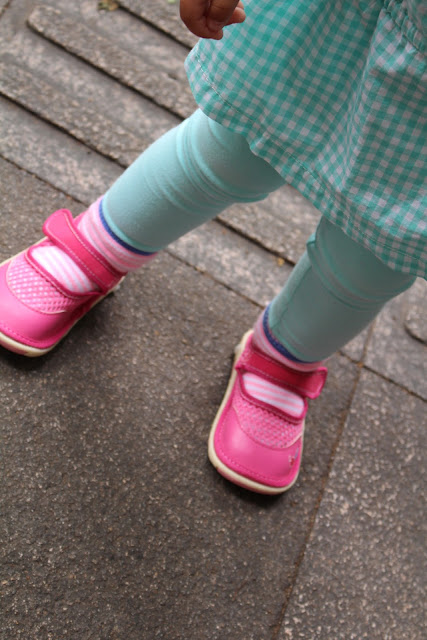 Her giggles and may smiles as she realized she was making little squeaks when she walked were priceless. I'm thankful that after buying these shoes, we found Jenny's store where I had bought shoes for Juliana almost nine years ago. We bought a few more pairs of shoes for home there. After satisfying the girls' needs for new shoes, Dad was ready for one of his Guangzhou favorites. 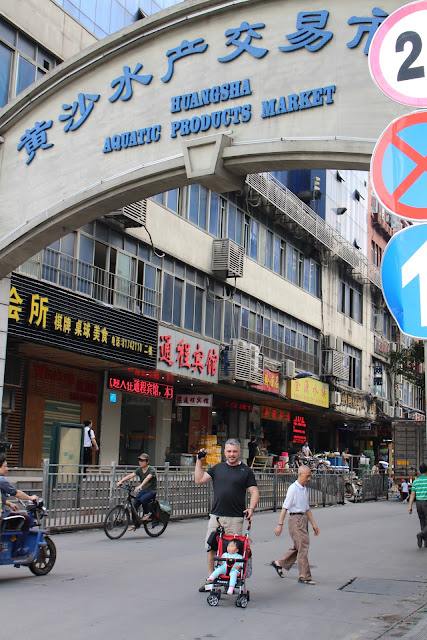 He was like a kid in a candy shop. Every imaginable creepy crawly sea creature in buckets and tanks. 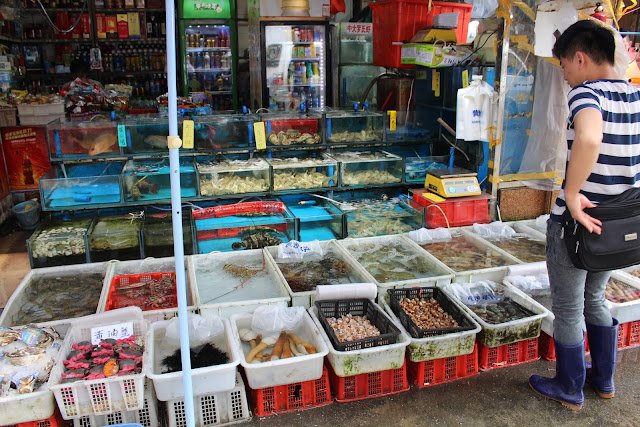 Not to mention the chaos of cars and people trying to package and ship said creatures. 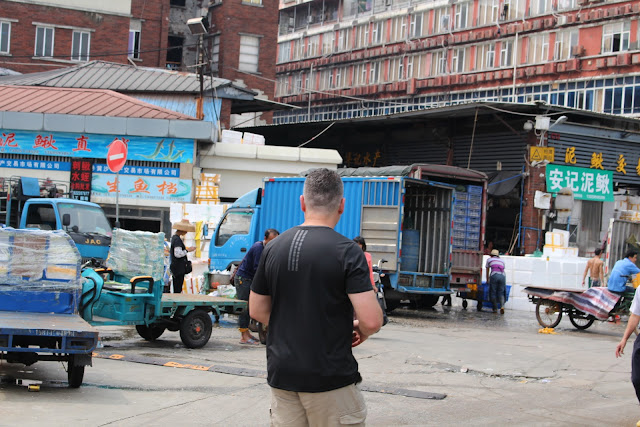 David brushed up on his Chinese this trip and was able to converse enough to get this guy to let him hold the octopus. 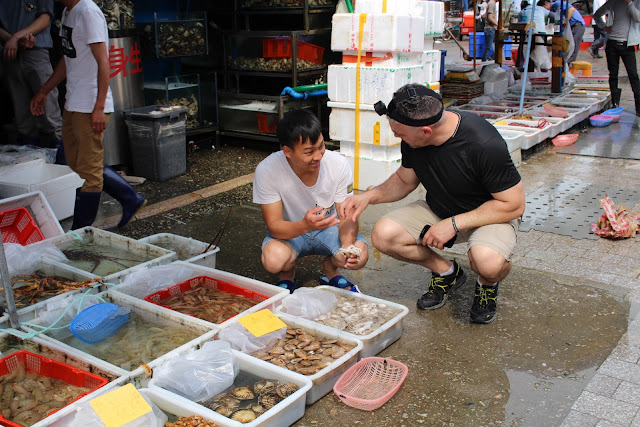 Again, I hope he eventually adds some of the go-pro footage of the market. What can't be conveyed by pictures and video is the smell of this place from blocks away. Our trips to this market are why my shoes made their way to the trash on our arrival home. 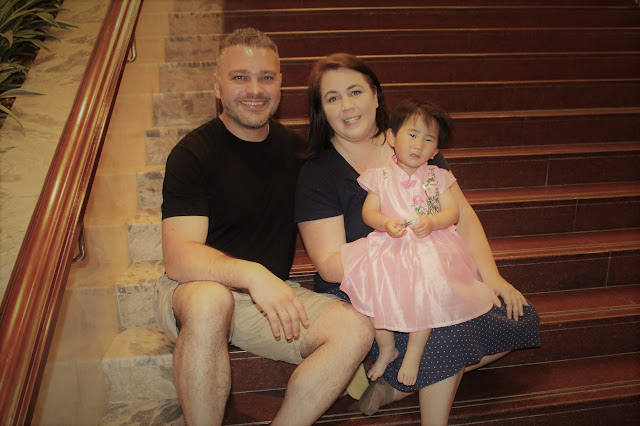 We cleaned up for dinner and our red stairs pictures and then went as a group to dinner at a Portuguese restaurant. 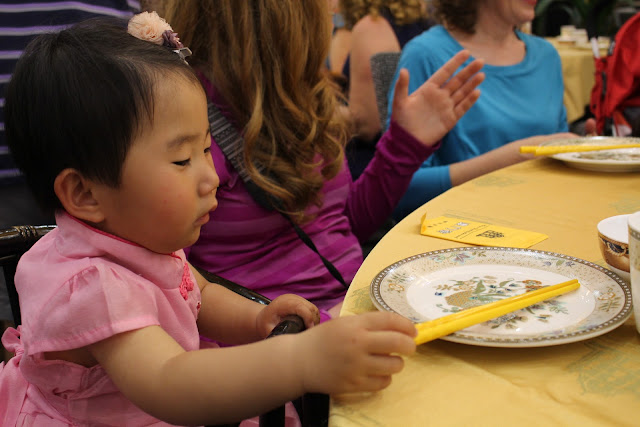