** Sort of Gotcha Day, the real gotcha day will come when we are all together as a family. We have a few more weeks for that :) 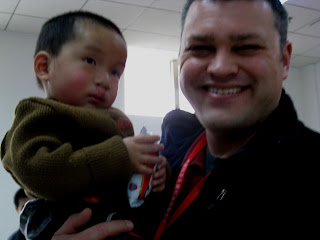 It seems odd for me to be writing this post, I really wish blogger was not blocked in China. I will do my best to relate dh's experiences. 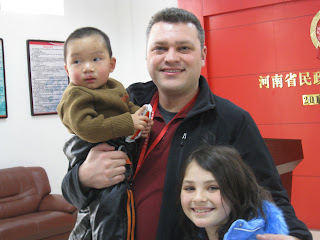 Dh and Banana left early to go to the Registrar's office. When they finally got to meet Joseph they were surprised by how big he was. He seemed to be much bigger than Juju who is a little over a month older than Joseph. They also really liked his leather pants-- leather lined with fur. From the video it seems that Joseph was fairly comfortable with David. He was quiet and withdrawn, but became more anxious when handed to his sister for a moment. He later warmed up to the notion of Banana holding him. 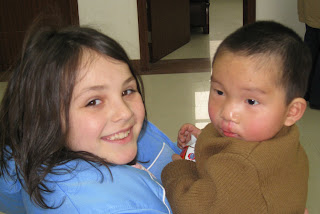 After signing the necessary paperwork they left the Registrar's office and came back to the hotel. Unfortunately, there was some paperwork mix-up and our adoption guide had to take him for a few minutes. Dh knew I was anxious about seeing little Joseph so he called. I really thought he was kidding when they said they had to take him back for a moment. It isn't fun to play games with a woman who is nine months pregnant. 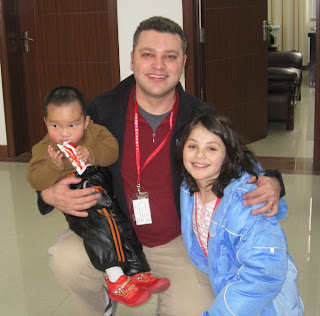 After a few minutes, Joseph was returned to them. He was quiet, but content to have dh hold him. He laughed when tickled, and seemed to really like any snacks he was given. He sat on dh's lap for quite some time then got on the floor and played with Banana. He instantly was drawn to the noise-making Tonka truck and laughed each time it made any sound. 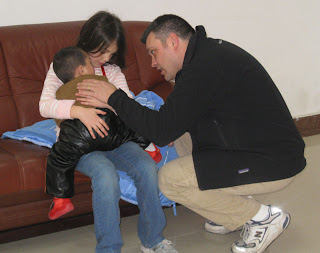 Joseph was getting hungry so they were going to run out and get lunch and stop at the store for snacks. I thought it was a good idea to give the little guy a bath and try on some of the clothes they had taken. I was worried everything would be too small and they would need to pick some things up while they were out. Dh said he was going to sign-off and get Joseph in the bath. I asked him to leave the Skype running, even if I couldn't see, I could hear and be part of the day.

Dh started to undress him and all I could hear was, "Oh my goodness" over and over again. It seems the leather pants weighed about 5 lbs and they were just the first layer of clothing. As they peeled back the layers both dh and Banana said he was much smaller than they thought. After a quick bath it turns out most of what I sent will be a perfect fit. Even the shoes seem to fit him.

Since it was 3 AM here, I finally had to sign off. They needed to feed the hungry child and I had to try to get some sleep. Again, technology is amazing. I am so thankful for it. It is still not a good substitute for being able to hold this little one and I am anxiously awaiting their return.
Posted by Nikki at 8:32 AM

How wonderful, Nikki! Continuing to pray!

great pictures. I used to teach a lot of international preschoolers and a lot of them from other countries always wore so many layers of clothing! Seriously like 5 shirts...lol!

Anyway, he is so precious!

Oh my gosh -- the leather pants are too much!!!

He's just precious and you can't help but wonder what's going through their little minds during a time like this.

I am thakful you have your Skype and that H. is with them. I wonder if he will forge a special bond with her since she was there at their first meeting. :)

Thanks for sharing all of this with us, Nikki. You are an amazing woman! :)

This post just gives me chills and puts me right back in China myself. It's so good to see Joseph with David! I know your heart is so heavy wanting to be there, too. Prayers continue for everyone!