Yesterday, as dh was mopping the floor, the baby was crying, and the two year olds were creating quite a rabble, Bophie was playing with her new doll. This doll talks to her, it cries, tells her she wants to be fed, coos for a kiss, and even lets you know she needs a potty-- all in four different languages. In the chaos, Bophie turns to me and says, "I really wish this doll would just speak up!" Bophie has some extra fluid in her ears, which didn't help the cause. She will be having tubes put in her ears in a few weeks, I am hoping this will help the doll "speak up." 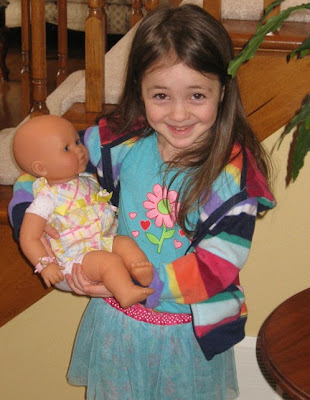 Speaking of dolls, Juju also got a new doll for Christmas. She and Bophie found a stash of old diapers and asked if they could put them on their dolls. I relented just to see the smiles it brought them. There is something about a little girl and her doll. The diaper was a little to big for Juju's doll and after 3 or 4 minutes it began to fall off. Juju picked up the doll and said, "O pap." Right then I was thankful that this little girl often needs a Mommy translator, because at least when out in public, most people would not know that my sweet, two-year-old, adorable little girl just said "Oh crap!" in a tone that strangely mimics that of her mother. 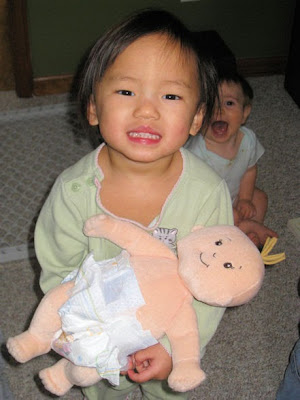 The older girls are on the hunt for a missing library book. A library book that happens to be on dh's library card. Last night, we knew we had allowed bed time to stretch too late when they became a little too upset about the missing book. An emotional Banana asked if I had ever lost a library book. Me, lose a library book? The most egregious story in this category is the library book I lost my senior year of college. The one I swore I returned and refused to pay the fine. The one that held up the reception of my degree. I fought up and down, certain that book was in a pile of returned books. Years later, during a move, I was reminded of my profound need for humility when I found that book. I consider sharing this story as an act of humility made in reparation for the pridefulness displayed then.

Finally, all these tidbits display little ways my dh has shown how much he loves me. He was done with dolls for Christmas. It was the only thing he did not want to buy this year and yet three of my girls received dolls. He was mopping the floor. He only teases me a little about the kids picking up my poor mannerisms and sayings (of course thankful they weren't picking up his). He also was incredibly patient with me as he was thrust in the middle of my library book debacle. More than all these things, though, his love for me was abundantly clear when I came down this morning to find a pot of coffee, piping hot, waiting for me in the carafe. He doesn't even drink coffee and yet, for the third time this week, it was ready and waiting for me when I came downstairs. It honestly doesn't get any better than that!
Posted by Nikki at 9:49 AM

Look at Gabe in the back of Juju's picture. LOL! He is so stinkin cute! Miss you guys.