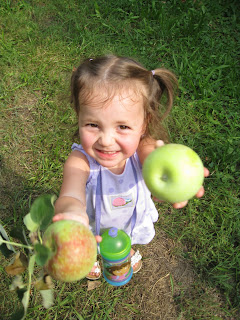 The last few weeks have been hectic at work for dh, so we were all due for some much needed family time. After Mass on Sunday, we decided to trek out to pick some apples/peaches (thanks Emily for the recommendation). We loaded all the girls into dh's half a car (affectionately termed by Banana b/c it only has 2 doors) in an attempt to minimize gas consumption. I look forward to the day when there are too many of us to take advantage of this option, but for this trip it seemed the "green" choice.

Being a Sunday afternoon, we normally would have taken naps first, but I was a little stir crazy from the past week and anxious to get out the door. Three girls overdue for a nap and one very small backseat do not a good combination make. Add this to close proximity to mom and dad (who also could have used a nap) and your left with close to a deadly combination. Luckily, the one in the middle crashed first making a natural border between the other two warring bodies. Soon Bear fell asleep too, so it turned out to be a rather relaxing Sunday drive. 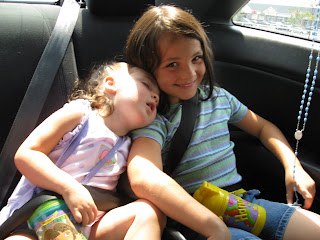 Dh makes a great apple pie so we were looking for some good pie apples. The recipe is from a favorite local restaurant Cap City Diner. It calls for 8 sticks of butter-- anything with 8 sticks of butter has to be good, right?

We spent quite some time searching the orchard for the Paula Reds. When we did find them most of the early trees were empty. We eventually found a few good trees when Bear declared she had to go to the bathroom -- should have seen that coming. I convince her she can wait only to have Banana inform me she now has to go as well-- really should have seen that coming. We get to the end of the Paula Red row with barely enough apples to fill a fourth of the bag. Being the frugal (read: cheap) mom that I am, if we are going to pay for a bag of apples that bag is going to be filled (read: bursting at the seams). I decide if the pie apples aren't in season I will gather some eating apples, Fuji sounded good. So I decide to schlep across the orchard with Bophie while dh takes the other two to the bathroom. 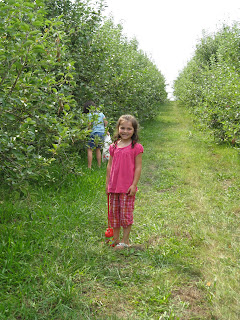 We finally get to the Fuji apples and they are nowhere near ripe. At that time, I start to hear thunder. Dh had told me it was going to rain and I had the headache to prove it, but he said it was to start late in the evening and it was still early afternoon. I pick a few apples and hear the the brood returning. Dh really wants to make a pie so while taking the girls to the restroom he asked about other pie apples. Turns out the row next to the Paula Reds is Cortland apples, and they also are pretty good pie apples. So we turn around and hike back to the Cortlands, thunder continues to brew. We pick some Cortlands and I ask dh how many pies he plans to make. We have enough for 1 maybe 2 pies at the time, but only half the bag is full. He of course says one, so we are left looking for more eating apples.

I had passed the Gala apples on my way to the Fuji and they looked fantastic, so we again made the haul across the orchard to fill our bag. It is at this time (bag only half full, thunder looming, 3 girls tired from the multiple hikes across the orchard) the handles on the bag break. Unfazed, I continue on my mission of filling the apple bag. I take the older girls for more apples, dh decides the storm is coming close and we are going to get caught and takes the baby to get the car. The girls and I were stuffing, shoving, and piling the last apples into the bag when the first drops began to fall. By the time we made the 30 second drive to the store to pay for our bag (and buy cheese and jerky for dh), it was coming down in bucketfuls.

It was still a wonderfully nice day.
Posted by Nikki at 5:57 PM