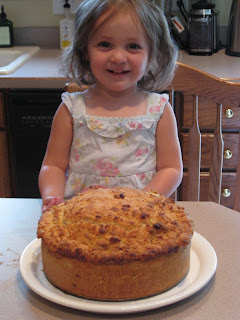 After Sunday's apple picking outing, you can be sure this family will be getting a good dose of apples. First up is Dad's apple pie. As I mentioned before the recipe calls for EIGHT sticks of butter. I have kids who will bite butter off the stick so you know it is going to be a hit here.
Not only does it call for all that butter, there are ridiculous amounts of sugar, 20 apples, and it is labor intensive. This is not an undertaking that dh makes often. However, last night we were expecting company. Not just any company-- some of our favorite company (I have to butter him up, no pun intended, because he has threatened to leave snarky comments on my blog). Such company calls for only the best so Dad's apple pie it was.
While Dad put it together, I had to put it in the oven to bake since he was at work. The daggone pie takes two and a half hours to bake. In the morning before leaving for work, dh had given the girls instructions for baking the pie. He should know better than to play telephone with a 5 and 8 year old when it comes to important directions. Banana said we had to heat the oven to 550 degrees and Bear said it had to be put in at 2 o'clock... Really, it was 350 at 3:30. Thankfully, he remembered to leave me the recipe.
The directions also called for setting the pie on parchment paper because it has a tendency to leak. Since I had no parchment paper, I improvised with wax paper. Not a good idea, smoke filled our kitchen. Banana was convinced the house was on fire. After many reassurances to her, a new pan to catch the dripping, and a fan to air out the kitchen, the pie was cooking.
Thankfully, dh was home in time to pull his masterpiece out of the oven on time. I had indeed been able to successfully follow his less than precise directions.
Posted by Nikki at 9:08 PM

Email ThisBlogThis!Share to TwitterShare to FacebookShare to Pinterest
Labels: apples

Love it if ya make that pie when we're coming over :)