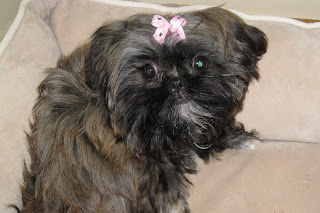 Bella is our recently acquired puppy. In a moment of weakness, dh and I allowed her to come into our home. We had tried fish, they died after my niece decided they needed chapstick. Then we had a guinea pig. Her demise came shortly after getting out of her pen when we had her in the backyard for fresh grass and cage cleaning. After spending quite some time trying to dig her out of our brush pile, she came in with a big gash on her back (I was similarly covered with scratches and dh had a good laugh) and was never the same. You would think we would have learned our pet lesson.

Bella is as cute as can be and poor dh has had to get over the fact that she is definitely a girl dog. She became very sick a few days after we go her. The breeder sold her much too early. For weeks we had to force feed her. She had convulsions and quite honestly neither dh nor myself thought she would make it. Here we are a month and a half later and she has more than doubled in size (a little over 2 pounds now) and seems to be thriving. Bophie is especially fond of her and Bella is the preferred doll. She gets carried around, wrapped in blankets, taken for a ride in the stroller, etc. She is the perfect dog for us in that she tolerates all of this very well, sometimes I even think she enjoys it. 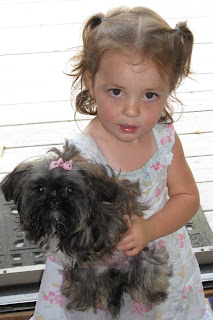 Lately poor Bella has been looking pretty mangy so we decided that even though she was pretty young, it was time for a grooming. So today I took her in for a "puppy treatment" of a bath, eyebrow trim, foot and belly trim, and rear-end cleaning. The dog will get more spa treatments than me. I declined the "top dog" extra charge for premium shampoo and conditioner (I don't even use premium shampoos and conditioners!), but I could not resist the little pink bow. Mostly because I knew how dh would react:)

Email ThisBlogThis!Share to TwitterShare to FacebookShare to Pinterest
Labels: Bella