The Great Wall-- Our Last Day in Beijing 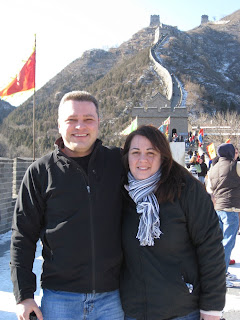 I only have a few more minutes of Internet connection so I am not sure I will be able to get too many pictures posted, but I will do my best.

We started the day at our hotel's breakfast buffet. David had decided he was going to try these: 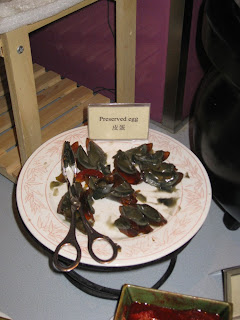 As you might expect, they were terrible. It took spicy cabbage, some tea, and a few rolls to wipe out the taste! 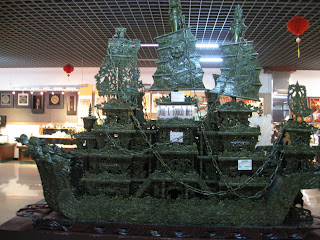 We then drove to a Jade Factory. As part of our tour, we are required to walk through a few of these factory stores. The jade was beautiful and it was amazing to see all the work that went onto the carvings.

We then made our way to the Great Wall. I was absolutely amazed at how big it was. It was also quite cold. We had also been warned that you don't walk along the Great Wall, you climb it. That is certainly very true. It was incredibly steep. We were also told going up was easy, coming down would be more tricky because of the ice. I thought coming down was much harder because I was forced to look at how far up I was and because it was quite slick. I had visions of slipping and knocking the others in front of me down like bowling pins. I made it to the third tower, but David decided to make it to the top. 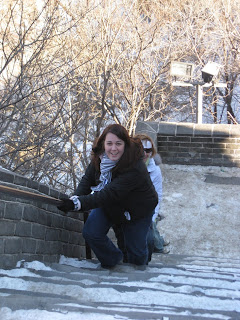 I am quickly running out of time, I will have to add a few pictures and write more tomorrow. Tomorrow is the day we have all been waiting for, little Juliana will be given to us in the afternoon. As much fun as we have been having, I am beyond excited for tomorrow to come!

I love these pictures so much.
I look forward to seeing more.

Thanks for sharing your story with us! It's like hearing it again from my in-laws. My Mil & Fil went with Bil to Beijing to pick up their little Therese. Sil couldn't go because she had gotten pregnant! Shhhh! They did all the same things you're doing.

I'm sure tomorrow will be wonderful!

Okay I didn't get on yesterday and today your "I'll be home for Christmas" got me all teary. I'm beyond excited - I cannot believe I'm looking at these pictures and probably this morning as I'm leaving this comment you'll have met your baby! :)

Do you know when I first met you at Bible Study this was already in the works? Hard to believe it's taken this long - I'm sure it seems like a lifetime in the making. But what a gift! Cannot wait to meet Miss J.

Oh, and I can't resist -- I hope David finds his beaver brush!

Hugs and Kisses to you all. Can't wait to hear about your meeting your little girl.
God Bless

I am so excited for you! May tomorrow be a wonderful day! I will be praying for you!