No adoption in China can truly be finalized until the famous Red Couch Pictures have been taken. For those less familiar with China adoptions, The White Swan Hotel (where we are staying in Guangzhou) has housed many adoptive families since foreign adoptions were allowed in China. The U.S. Consulate used to be next door so it was the most convenient hotel. In The White Swan there are red couches in the lobby where families and groups would take pictures. After awhile Red Couch Pictures became a staple of American families adopting in China.

Here are our Red Couch Photos. First up is a shot of the four girls in our travel group. All of these girls were in the same orphanage and are about a month apart in age. 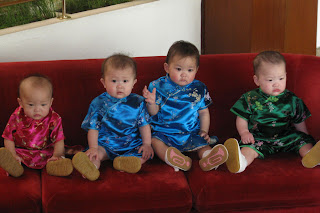 Next is a family shot. David was unprepared to get his picture taken so feel free to give him a hard time about his ratty t-shirt! 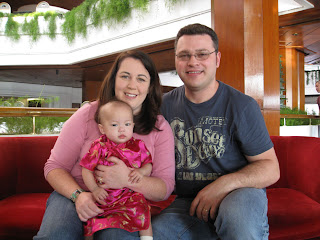 Finally, here are all of the adoptive families in our Guangzhou travel group. We were joined here with two families who adopted older boys in other provinces. They are both about 6 years old and just darling little boys. 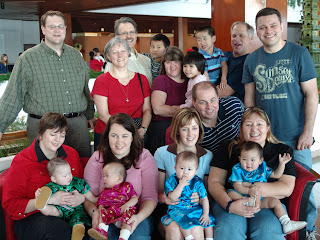 Yeah! You're coming home soon and your entire family can enjoy Christmas together! Safe travels, Nikki!

Red Couch pictures - that's awesome! What a great tradition! Look at all those beautiful little babies - love their outfits! :)

Can't wait to see you.

I hope you are safe at home and snuggling all your beautiful girls! Merry Christmas!!!