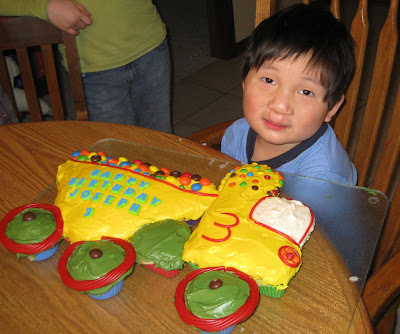 This has been a busy week for us. I think five dentist appointments and eight doctor visits in four days qualifies for a little more than busy. Throw in piano lessons, first soccer games of the season, a trip to an indoor waterpark and I think I could call this week's schedule downright hectic. It doesn't let up over the weekend either. Despite the busy-ness yesterday we celebrated Joseph's third birthday.

Joseph loves anything with wheels so when I found this kit on clearance at the grocery store after Christmas, I knew it would be a hit. It was as fun to decorate as last year's monkey cake. Little Joseph didn't know what to make of it though, I don't think he realized it was cake. In the end I had to just give him a slice of the traditional cake I had also made. 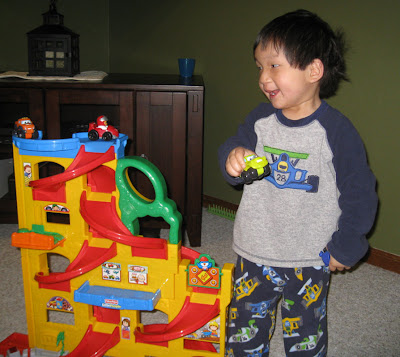 Joseph is a race car kid. He falls asleep running them on his pillow, he wakes up and gathers them and tries to carry more than his hands will hold. He lines them up, he crashes them, and recently he has learned how to send them driving across the room. The first time I pulled out the race car jammies he wouldn't take them off. I think he wore the shirt almost three days before I decided it absolutely had to go in the wash. The race car ramp seems to be a hit too. He was up before the crack of dawn this morning ready to shoot the cars down the ramp. I'm pretty certain he's figured out that at 4:30 A.M. he can pretty much have the toys to himself. I've figured out that no amount of coffee will make 4:30 A.M. any easier.
Posted by Nikki at 7:17 AM