Juliana's check-ups have gone pretty well so far. We won't know the results of the blood tests and such for a week or so, but right now she looks pretty healthy-- except she is considerably underweight. She measured about 25% on the height scale, but she was off the charts low in weight.

The doctor said she needs to start eating some solid foods and not just formula. The trouble is that she wants nothing to do with any food from a spoon. While in China we tried all of the foods we had been told she would get in the orphanage; congee, egg custard, etc. She wouldn't eat any of them. When you put them in her mouth, she would hold her tongue out until she gagged. We decided it was best not to upset her while travelling and changing her whole known world and stuck to the bottle. We were thankful she took so quickly to our American formula and decided she was getting good nutrition there.

Now that we are home and on doctor's orders to get this little one eating, I bought out the baby food aisle of the grocery. The girl has to like something, right? So far, wrong. We started with all the step 1 veggies (I know not to get them hooked on the sweets first). Every attempt has met with a vigorous head shaking no, then when I manage to get a little food in that mouth she sticks out her tongue and gags. I get the same response when trying to feed her a mixture of rice cereal and formula (the exact same thing we are giving her in her bottle in different proportions). 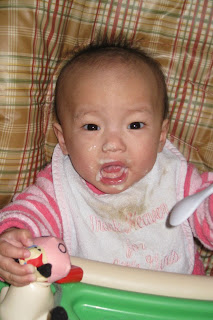 I tried to get a picture of her tongue sticking out, but I am too slow.

After struggling for what seemed like an eternity, I gave up. It then occurred to me my little 2 year old Bophie was nowhere to be found. I remembered she was going to help me feed little Juliana, where could she be? 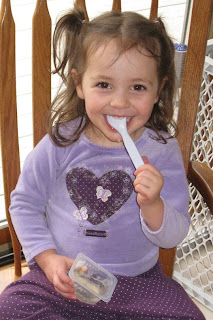 Apparently that theory about what kid doesn't like banana yogurt dessert wasn't too far off the mark.
Posted by Nikki at 11:42 AM

Good luck with Juliana-they say it takes 10 tries of one food for kids to like them...she'll eat!

Oh my word, that is so funny. Yep, when they're quiet, they're up to something...And at least you won't have to worry about wasting anything Juliana won't eat. :)

Hugs and I miss you all!

here's a trick: baby apricots on the tip of the spoon, with carrots toward the back.