Peeking into my living room 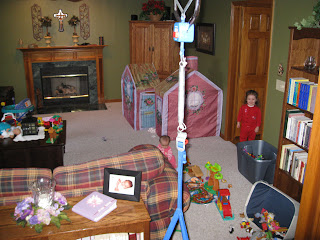 Last night all the kids were tucked in bed, some of them were actually sleeping. I came downstairs to my living room to relax. I sat down on the couch and then it hit me. I was surrounded by toys-- overrun by toys.

I turn to dh and say, "Remember when Banana was just learning to crawl and I insisted there be no toys in our living room? Just look at us now, eight years and four kids later." You can file this away with all the other stupid things I said before we had kids. I figured they had a basement playroom for their toys. If they wanted to play, they could go there.

I had this crazy notion we could still have adult space, that the kids wouldn't invade every aspect of our lives. I certainly didn't foresee the day when I would allow my space to be invaded so I could get 15 minutes of peace and relative quiet. Yet, here we are. My living room has been taken over. I have two little ones who won't play more than 15 feet away from where I am, and two older ones who need to be schooled. The only option is to allow them to have the toys close by so I can get a little school done. Now I am allowing them to invade my space not for my own peace, but rather to give me time to tend to the other children.

P.S. I can't believe I am actually posting a picture of my house looking like this... I don't know why it is so hard, it looks like this any day we are trying to get some serious schooling done. If I really wanted to embarrass myself I would show you my kitchen :) I promise come 4:30, it will be picked up, but all those toys will still be tucked away in my living room.
Posted by Nikki at 8:50 AM

Oh please. Your home is beautiful. I too thought kids wouldn't invade 'my space' but they did. However about 2 years ago I moved them out. The boys room is just down the hall and they were old enough to play without me being near by. So there is a light at the end of the tunnel. But, your home looks great. I have laundry piled on the coffee table, large boxes from various items purchased, dusty musty 'stuff' that Tom has brought home from the storeroom we are cleaning out. And let' not forget the exposed beams where we still need to sheetrock.
So I am very envious of your 'messy' living room.

Your house looks like a home...and that's a very special thing.

It's OK - check the latest posting on my blog.