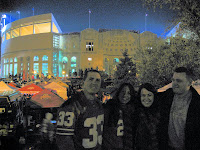 I've posted before about how wonderfully DH's company has treated us. This weekend, we won tickets to a tailgate party across the street from the shoe (OSU Stadium). While I knew it was crazy to do this on an already busy weekend, I couldn't pass up the chance to watch a big game in style!

I come from a long line of Buckeye fans. My grandmother's buckeye necklace is one of my most treasured possessions. My two year old can sing the fight song. The first station plugged into my radio dial in the car is The Fan Sports Radio. Thankfully, I have been blessed with a dear friend who can understand my football obsession. 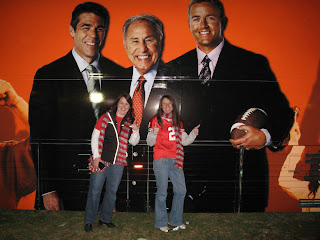 We are probably the only two women I know who can immediately recognize and name all three men on that bus -- the only exceptions being my mom and Aunt Rose! For those who are sports deprived, it's the ESPN Game Day crew who were set up next to the company tent.

Before the game we watched the players pass right by the tent as they walked into St. John's Arena for the Skull Session. There was a jumbo-tron set up outside the tent to watch the game and several big screen tv's inside. It was a college football fan's paradise.

Whenever DH goes to one of these parties, he's immediately drawn to all the s.w.a.g. (stuff we all get not sista with a gun) and we inevitably leave with all kinds of goodies. His biggest reason for going to these parties is the free food and all the loot. He wasn't disappointed! We came home with picnic blankets, camp chairs, gift certificates, and a signed Tressell football! He was like a kid in a candy store with all the give-aways.

UPDATE: We also joked about the photographer taking pictures of the event. It felt like we were lurking in the background of half his pictures. Here are a few he took. One of us is each of these pictures, see if you can find us.

Wait a second -- shouldn't you be wearing blue and white?

Nice with the pics.I like my credit too. The Pol

Oh, what fun. My husband is a graduate from PSU, so we were on the other side. (Figuratively...we weren't lucky enough to be at the game.)

Is that you in the background of one of those pics chugging a beer?....I always knew you were a closet partier!

Um, BTW, I could totally name those three guys on the bus! You forget who I'm married to! :)

oh my word, who does your husband work for? tug (my husband) needs to get a job there (and for them to pay for a LONG move).
i can certainly tell you the gameday crew...fowler, corso, herbstreit (hello former ohio state quarterback). i can tell you that they changed the intro song this year to include desmond (undeserving, oh we dont give a damn for the whole state of michigan). i can tell you that someone in the pic is wearing a laurinaitis jersey and someone else possibly a pryor jersey (cant tell to make sure it is in fact just a 2).
at least we didnt have to hear that dumb lion roar (i hate when they play at northwestern and penn state).
SOOOOO JEALOUS!
r